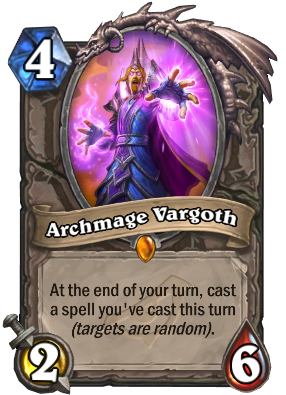 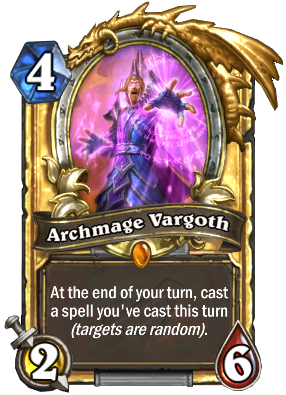 At the end of your turn, cast a spell you've cast this turn (targets are random).
Flavor text

For the boss of the same name, see Archmage Vargoth (boss).

Archmage Vargoth is a legendary neutral minion card, from the Rise of Shadows set.

Archmage Vargoth can be obtained through Rise of Shadows card packs, or through crafting.

Regular Archmage Vargoth was given to each player the first time they log into Hearthstone from April 4 to July 9, 2019.[1][2]

Archmage Vargoth has immense potential, but also requires planning to make sure you get the most out of his effect. In general it's a smart idea to only cast one spell per turn when Vargoth is on the field; that way, you're 100% guaranteed to duplicate the spell you wanted. As for what spells to use, in order to minimize the odds of things going wrong, it's best to stick to either spells that have no target (such as Eureka! or Holy Nova), spells that can only target a friendly minion (such as Big Bad Voodoo or Power Word: Replicate) or spells that can only target an enemy minion (such as Assassinate or Execute). Spells that can target anyone, such as Fireball or Blessing of Kings, run the risk of accidentally hitting the wrong minion and proving even worse than useless. That being said, if your opponent controls no minions, buffing spells such as Ancestral Spirit and Blessing of Kings are safer to use.

If possible, try to combo a spell with Vargoth on the turn you play him in case your opponent is able to immediately kill him. If they fail to do so, though, you're free to use your most powerful high-cost spells to duplicate, such as Mass Resurrection or Flamestrike.

Using a spell to summon Archmage Vargoth, such as Dimensional Ripper, Eureka! or Mass Resurrection, can result in you ending your turn with multiple copies of Archmage Vargoth. While the second copy won't immediately activate its effect, this will make it harder for your opponent to deal with both, letting you utilize Vargoth's effect at least once on the next turn. That being said, if you use a cloning spell such as Vivid Nightmare to control two Vargoth's at the end of your turn and Vargoth is the only minion you control, both will cast that same spell on one of your Vargoths, resulting in you ending your turn with 4 or more.

Spells that summon minions with taunt, such as Feral Spirit and Rain of Toads, can help protect Vargoth from enemy attacks when doubled (in addition to providing solid board presence for a low Mana cost). However, note that recasting Overload spells will double your Overload requirements as well, possibly leaving you with little to no mana during your next turn.

Archmage Vargoth doesn't work with Secrets, because it is not possible to have the same Secret active twice at the same time. Worse, if he attempts to recast a Secret, that Secret will be revealed to the opponent. With that in mind, it's often best to save casting Secrets until after Vargoth has left the field and instead focus on spells that Vargoth can exploit.

Archmage Vargoth is a human mage located inside the Violet Tower in the contested territory of Netherstorm. Throughout most of the questline, he interacts with questers using a projection.