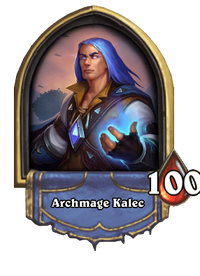 It's just a matter of time before he's the next Malygos.

For other representations of Kalecgos, see Kalecgos (disambiguation).

Archmage Kalec is a boss that can be encountered in Chapter 5 of The Dalaran Heist adventure.

Archmage Kalec's hero power will increase every time he uses it. Your best option at winning is to build a board and at the same time, deter him from using it. You can do this by forcing him to answer whatever you put on the board to drains his mana to below 2. However, you should try and end it quickly if you have the opportunity. If you delay too much, his spell damage inevitably snowball and become unmanagable, destroying any minion you throw at him and bursting your health down with high-damage, single target spells.

Taking any health boost, having this specific encounter in mind, is desirable. It could be Potion of Vitality, First Aid Kit passives, Good Food in the Tavern. Witch's Brew can heal your characters fully, if you can reduce its Cost to zero. Nozari is also a card you should consider drafting, because Kalec can deal a lot more damage that you have Health.

Arch-Villain Rafaam
Beware! Kalec is secretly a blue dragon. It’s not a big secret. It’s on his ID.
Kalec is a blue dragon in human form. Don’t give him a chance to spread his wings.
Kalec is the very incarnation of magic. Move quickly, before he saws someone in half.
Kalec will summon dragons to utterly destroy you! Do not worry. I will be fine.

Archmage Kalec
You have reason to be frightened, invader!

Archmage Kalec
In all my years, and I've never heard such nonsense.

Archmage Kalec
You don't understand the consequences of your actions.
Dalaran is not a toy to steal. People's lives are at stake.
Dalaran could have been your home too.

Archmage Kalec
Behold the might of Dragonwrath!
Feel the wrath of Kalecgos!
The arcane bends to my command.
This city is under my protection.
Tremble before me!
You tangle with powers beyond your comprehension.

Come, my allies. Aid me!

I deny your magic.

I will show you the power of the Spell-Weaver.

You are merely a novice.

If only you had proper training.
You have promise. A shame you choose to waste it.

Alexstrasza, how have you been?

I've stopped you once Malygos, I will do it again.

The Timeless One flies with us once more.

Ah, Ysera. It is good to see you again.

You'd ally yourself with the Destroyer? Have you no bounds?

Archmage Kalec
If only Jaina were here...
You seem troubled.
You shouldn't be wasting time in such circumstances.

Archmage Kalec
You're going to spend a looong time in the Violet Hold.

Kalecgos is the former Aspect of the blue dragonflight, after the death of Malygos. His mortal form is half-human, half-elven calling himself Kalec. Due to the blues being most in tune with magic of all the dragonflights, Kalec has the powers of a sorcerer and the strength of a warrior.

Prior to the Nexus War, Kalecgos was Malygos' investigator, and became involved in the search for residual energies of the Sunwell. He opposed Malygos' war against mortal spellcasters and became the blue dragonflight's ambassador to the Wyrmrest Accord.

During the events of the War against the Lich King, Kalec decided to not stand with Malygos. He allied himself with Alexstrasza and the Wyrmrest Accord to help stop his former master.

With the rise of Deathwing during the Cataclysm, Kalecgos was named the new Aspect of Magic and aided his fellow Aspects and the mortal adventurers in the battle with the Aspect of Death. After his defeat the blue dragons went their separate ways; Kalec has joined the Kirin Tor and now resides in Dalaran to pursue a relationship with its new leader, Jaina. He has since become one of the Council of Six.

This art depicts Kalecgos in his mortal form; he is depicted in his dragon form as Kalecgos.