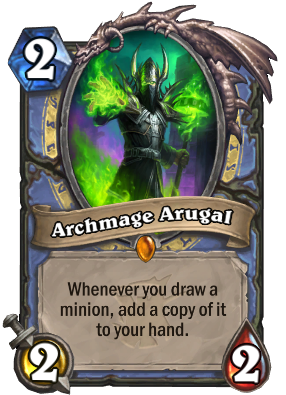 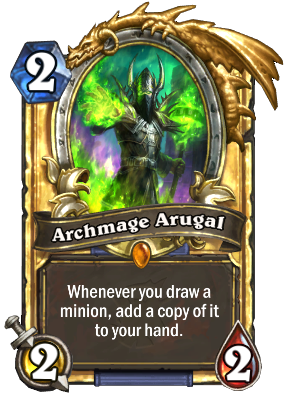 Whenever you draw a minion, add a copy of it to your hand.
Flavor text

Archmage Arugal is a legendary mage minion card, from the The Witchwood set.

Archmage Arugal can be obtained through The Witchwood card packs, or through crafting.

Archmage Arugal is capable of generating a lot of value combined with card draw, but because he only works with minions, he works better in minion-heavy decks. One deck where he fits well is in Elemental Mage decks, due to the large number of minions it runs, although if you draw high-cost minions they can be hard to get rid of. He also works well in aggro decks since low-cost cards are easier to get rid of. In fact, he is a staple in Murloc decks since Murlocs are usually very cheap and heavily rely on each other for synergy.

He has clear synergy with Book of Specters, giving you up to three more cards for just 2 more mana.

Archmage Arugal is a former mage of Dalaran who lived within the ruins of Shadowfang Keep and was later raised from the dead. He is most notorious for having unleashed the worgen once more unto the world by freeing them from the Emerald Dream.

Originally a respected patriot of Gilneas and a royal archmage, Arugal eventually became a member of the Kirin Tor of Dalaran. However, after the Scourge destroyed Dalaran and most of its populace, he returned to Gilneas. When the Scourge reached the outskirts of Gilneas, Arugal was called by King Genn Greymane to help him find a way to protect his kingdom. Arugal told him about the worgen, a mysterious race he had learned about, which could be summoned to help them. He warned Genn about the worgen's strength and ferocity, but the king decided to enlist their help. Using Ur's research, Arugal summoned worgen to attack the undead that attempted to pass the wall. Though they were successful in killing the Scourge, they later turned their rage against the Gilnean soldiers, turning some of them into worgen. This started spreading the worgen curse all through Gilneas.

Some worgen later sieged the keep of the noble Baron Silverlaine. Situated above the tiny hamlet of Pyrewood Village, the keep quickly fell into shadow and ruin. Driven mad with guilt, Arugal adopted the worgen as his children and retreated to the newly dubbed 'Shadowfang Keep'. He resided there serving Alpha Prime, protected by his massive pet, Fenrus — and haunted by the vengeful ghost of Baron Silverlaine.

Eventually, Arugal started his own worgen cult, by spreading the worgen curse to places like the Deep Elem Mine and Pyrewood and using his magic to keep the worgen under his control. Soon, he had worgen packs such as the Shadowfang pack and the Moonrage pack to do his bidding.

The Kirin Tor sent Sorcerer Ashcrombe to Shadowfang Keep to check Arugal's progress against the undead, ignorant to the fact that the archmage had now been driven mad. His activities eventually drew the ire of the Forsaken and he was later assassinated by Horde adventurers.

After he was defeated and beheaded by agents of the Horde, Arugal's headless body was buried at the foot of the path leading up to his former stronghold of Shadowfang Keep. At the behest of the Lich King, the San'layn princes Keleseth, Valanar, Theraldis and Atherann resurrected Arugal as a ghost in the service of the Scourge and sent him to the Grizzly Hills to subvert the trapper communities.

As indicated by Theraldis' comments, Arugal was sent to Solstice Village to convert the population into worgen, and later did the same in Silverbrook. He then settled his base of operations in Shadowfang Tower on Bloodmoon Isle, off the Eastwind Shore. The majority of the populations of the trapper villages willingly joined the Wolfcult, while those who resisted were killed or (in the case of the workers of the Hollowstone Mine) cursed to undeath.

He seems to command the Bloodmoon pack of worgs. He has three lieutenants: Varlam (a human cultist atop a worg), Selas (a worgen), and Goremaw (a worg).

Arugal's defeat, along with his three lieutenants, is required for Hour of the Worg.