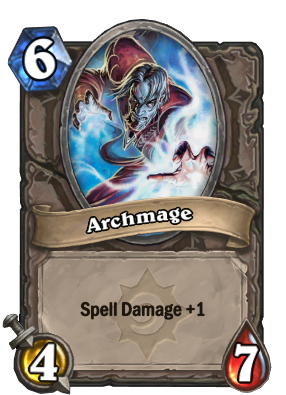 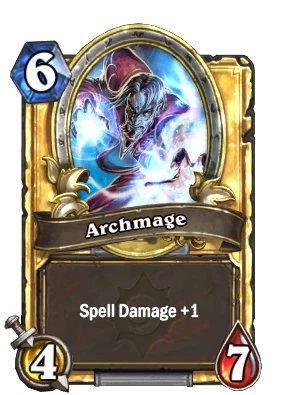 You earn the title of Archmage when you can destroy anyone who calls you on it.

Archmage is a neutral minion card, inducted into the Legacy set, formerly from the Basic set. 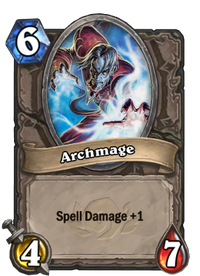 Two copies of regular and golden Archmage are automatically given after the player completes the Ranked's New player experience system, unlocking Wild and Classic format.

Archmage is a little expensive with a 6 mana cost for a 4/7 minion that gives 1 Spell Damage. If Spell Damage is your goal, other cards such as Kobold Geomancer, Bloodmage Thalnos, Cult Sorcerer, or Tainted Zealot are more mana efficient. However, the Archmage's 7 health increases his survivability, and can be useful for killing weaker minions. Its stats are also acceptable, so Silences will not work on it that much.

Violet Warden has exactly the same stats as Archmage, but also offers Taunt in addition to Spell Damage.

Summon
Are you ready for this?

Archmagi are a type of powerful caster that represent the pinnacle of magical power. Most archmagi hail from the magical kingdom of Dalaran but can be found among other groups as well. Weaving their intricate enchantments, these mages defend humanity with all the magical powers at their disposal. Mounted atop their trusty steeds, the archmagi brandish magical blades and ancient staves that serve to channel their fierce energies in battle. Though gruff and slightly aloof, these experienced wizards are a heartening sight upon any battlefield where the fate of humanity lies in peril.

Archmages can come from any arcane caster class as long as they have a sufficient level of arcana and spellcraft knowledge. They must have the ability to cast arcane spells and spells from at least five of the schools of magic at a certain level of proficiency. They must also spell focus in two schools of magic. Archmages of the Kirin Tor forbid warlocks and necromancers from their ranks.