This article is using {{Card template}}.
See Help:Style guide/Card for how to edit this kind of article.
Edit this article
Archivist Elysiana
52870 • DAL_736
Regular 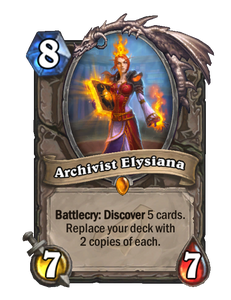 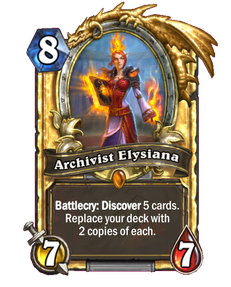 Your deck is just another organizational challenge to her. 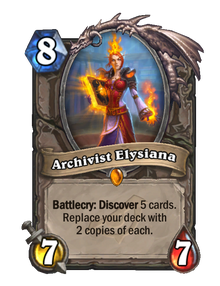 Archivist Elysiana is a legendary neutral minion card, from the Rise of Shadows set.

Archivist Elysiana is a perfect fit for a Control deck looking to win the value game. Her Battlecry will effectively reload your deck once you've run out of cards, delaying fatigue by an incredible 10 turns. She also pairs well with Chef Nomi and Myra's Unstable Element, reloading the turn after those cards are played.

Elysiana doesn't always have to be played when you're already in fatigue. Sometimes it can be a good idea to play her a bit earlier when you've already got your most important cards and your last few are expendable. This is especially true if you need a bit more value, since her Battlecry can potentially create useful cards.

Try to prioritize Discovering large spells and minions (or even certain Hero cards), since you'll almost always be playing whatever you just drew off the top and you want it to be as impactful as possible.

Keep in mind that Elysiana is a completely dead card before you've exhausted your resources. Because of this, she will sit dead in your hand for a long time if drawn early. Warlocks can mitigate this with Plot Twist.

Seance, Youthful Brewmaster, Baleful Banker, or Lab Recruiter can be played to reuse Elysiana, which aids tremendously against other control deck matchups that use Elysiana for outlasting them.

Her effect can also be used to remove negative cards shuffled into your deck, such as Bombs, Darkness Candles, or Corrupted Blood.

Archivist Elysiana is a Kirin Tor curator located at The Violet Citadel in Dalaran. If a player decided to skip the early Legion introduction quest line on their alt at level 98 to get to the Broken Isles right away, she allows access to the quests should the player later decide to do it.

Commentary: Our goal here was to preserve the feeling and power level of Archivist Elysiana when it comes to general use, while making much more difficult to play her multiple times in the same game. Shaman will still be able to replay Elysiana through Shudderwock, but this is not as common or problematic as what we’ve seen in control Warrior decks. Now, playing Elysiana alongside cards like Baleful Banker or Youthful Brewmaster should be a less consistent strategy.