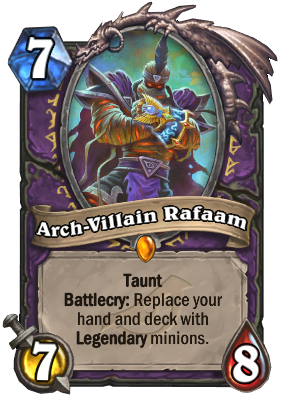 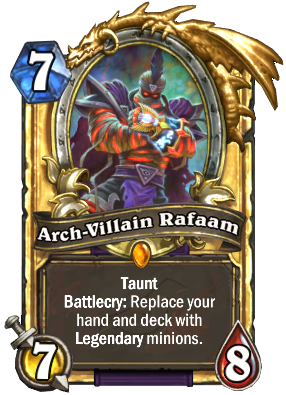 Minions must wash hands before being LIQUIDATED AND REPLACED BY SOMEONE BETTER.

Arch-Villain Rafaam is a legendary warlock minion card, from the Rise of Shadows set.

Arch-Villain Rafaam can be obtained through Rise of Shadows card packs, or through crafting.

Arch-Villain Rafaam's stats are very strong for a Taunt minion, comparable in distribution to those of Ancient of War. His Battlecry is also potentially very powerful, as Legendary minions tend to be stronger than your average fare. However, you must keep in mind that the Legendary minions you gain are completely at random, and any structure or strategy your deck has will be thrown out the window in exchange for random value. This means that there are generally three ideal situations in which Rafaam should be used:

Rafaam can also be used in counter-play against your opponent. For example, if they summon King Mukla, the two Bananas added to your hand can be used as fuel to create more Legendary minions. Tricky cards inserted into your deck such as Bombs or Hakkar, the Soulflayer's Corrupted Blood can be effectively nullified and transformed into a boon instead. A stellar combo would also be to play your own Hakkar, let it die, then use Rafaam to destroy your copy of Corrupted Blood, effectively making the damage it deals one-sided to your opponent.

Rafaam synergizes well with Supreme Archaeology, increasing the chance of drawing something huge with Tome of Origination once completed.

In Arena, where board presence is generally more valuable and reliable than card synergy, Rafaam is an easy pick, not only for his superb base stats but because any Legendary minions he generates are going to easily turn the tide in your favor.

For the lore of this card, see Rafaam (Lore).