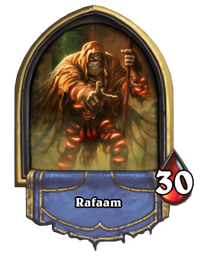 He stole the staff and has nearly destroyed the museum. This has to end!

Arch-Thief Rafaam is a boss found in the League of Explorers adventure. He is the third boss in the adventure's fourth and final wing, Hall of Explorers.

Rafaam returns as the fourth and final boss, Rafaam Unleashed. 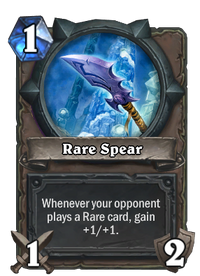 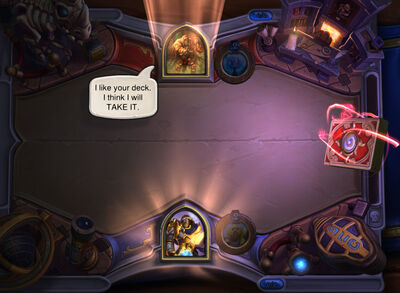 At the beginning of the encounter Rafaam will steal the player's deck, using it as his own. The player will be given the deck listed below (depending on mode) to complete the encounter.

The strategy for this boss is fairly simple - build a deck made up of the worst possible cards. Many low mana cards are excellent candidates, as well as various others which are simply very poor, either in general, or specifically in that deck. For example, Anyfin Can Happen is potentially a very strong card - but not if there are no Murlocs in either deck for it to summon.

While the boss will be massively disadvantaged by the deck provided for him, his Hero Power Unstable Portal (Heroic) tends to still provide some very useful options, with a sizeable cost reduction.

A good way to beat this boss is by maximizing the effect of Rare Spear, by building a deck with rare cards that are almost useless by themselves. For example: Dragon Egg, Nerubian Egg, Eerie Statue, Ancient Watcher, Secretkeeper, Murloc Tidecaller and Target Dummy. Alarm-o-Bot and Coliseum Manager can make the whole strategy even easier.

Warrior is a good class due to its access to Cursed Blade. Upgrade! can also boost the number of times the player can hit the boss once they have the Cursed Blade equipped.

Rafaam apparently never plays Sir Finley Mrrgglton, making it a dead card useful for including in his deck. If he did, that would take away his unique Hero Power and make him much less of a threat. However, he will play Lord Jaraxxus if given the card, thus leaving himself vulnerable to all the usual Jaraxxus counters, and has even been observed to use Sacrificial Pact on himself afterwards, committing suicide.[1] 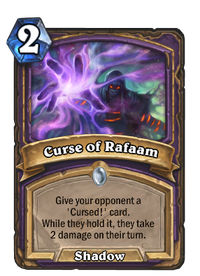 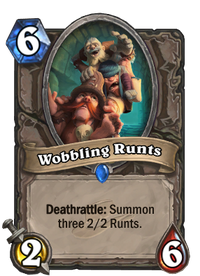 Arch-Thief Rafaam
Is that the deck you're going to use? Heh heh heh...

Arch-Thief Rafaam
Oh yes. This hand of cards is INCREDIBLE.

Elise Starseeker
Sorry about the deck. We built it last year for a tournament and haven't changed it since.

Arch-Thief Rafaam
Is this deck ALL GOLDEN? Your collection rivals my own!

Arch-Thief Rafaam
Magma Rager?! Why would you play this card?

Arch-Thief Rafaam
Perhaps I made a mistake taking your deck.

Arch-Thief Rafaam
Your deck is garbage. Time to use my own.