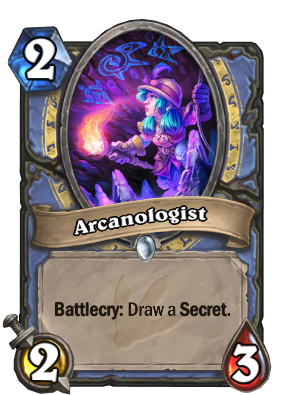 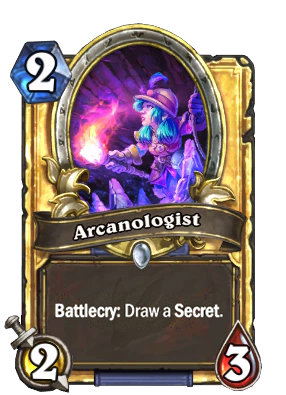 Battlecry: Draw a Secret from your deck.
Flavor text

What did you draw? Shhhh… it’s a secret.

Arcanologist is a common mage minion card, from the Journey to Un'Goro set. 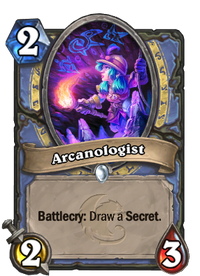 Arcanologist can be obtained through Journey to Un'Goro card packs, or through crafting.

Two copies of regular Arcanologist (Core) are obtained for raising mage to level 3.

Two copies of golden Arcanologist (Core) are obtained for winning 50 games as mage.

Arcanologist (Core) is uncraftable and cannot be crafted or disenchanted.

This card is incredibly powerful and fits into a wide variety of decks. It is a high value minion that also serves as a fully functional early-game board presence. The only requirement is that your deck contains at least one or two Secrets. But if that is the case, you will probably benefit from playing this card.

For mid-range decks, Arcanologist can give you Mirror Entity and Mana Bind, allowing it to scale into late-game very well. For combo decks, Arcanologist is even better as it can fetch one of your combo pieces if you only include one kind of Secret in your deck. Ice Block mages can find their life insurance more easily, and mages using the Open the Waygate Quest can use this to draw Mana Bind. Lastly, this card is an auto-include in any deck with heavy secret synergy.

Arcanologist is a slightly weaker version of Mad Scientist mainly because not only it provides a card draw but it puts the secret directly into play without using 2 mana on your turn or can be played during enemy turn which is better in most cases since it also provides more tempo as well.

This card appears to depict an explorer or researcher of the arcane, possibly seeking out the secrets of the crater.