This article is using {{Card template}}.
See Help:Style guide/Card for how to edit this kind of article.
Edit this article
Arcanite Reaper
304 • CS2_112
Regular 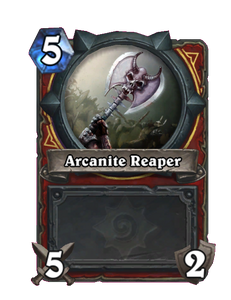 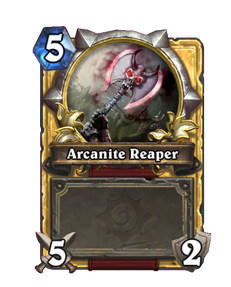 No… actually you should fear the Reaper. 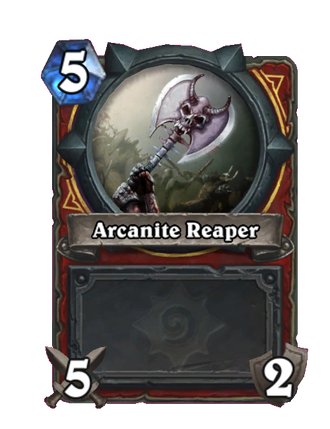 Arcanite Reaper is a warrior weapon card, inducted into the Legacy set, formerly from the Basic set. 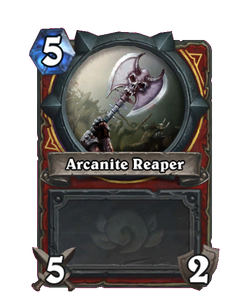 Regular and golden Arcanite Reaper are uncraftable and cannot be crafted or disenchanted.

Arcanite Reaper is a strong mid-game card, useful to either take out large enemy minions or simply swing at the hero.

Arcanite Reaper is often used in aggressive warrior decks because it deals 10 damage for 5 mana, half the cost of the mage's

Pyroblast, although it cannot ignore Taunt. By immediately attacking with the Arcanite Reaper, followed the next turn with a second attack improved by

Heroic Strike and the summoning of

Leeroy Jenkins, a warrior can deal 20 damage in 2 turns, which is often enough to finish off the opponent when running this type of deck.

Arcanite Reaper was a craftable weapon in the original World of Warcraft and very popular for orc warriors due to their racial axe bonus. It's now an heirloom and also used for transmog models.