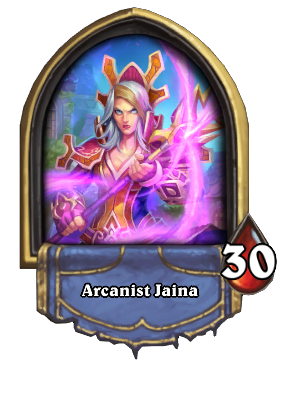 Arcanist Jaina is an alternate hero for the

This is Jaina Proudmoore wearing the Arcanist Regalia armor set.

Arcanist Jaina can be obtained by reaching final levels in Rewards Tracks.

Once unlocked and selected for use, Arcanist Jaina replaces Jaina Proudmoore whenever playing with a Mage deck, as well as:

When viewed in the collection, Arcanist Jaina has the following flavor text:

If Jaina fights against authority while wearing this regalia, she becomes an anarcanist. Obtained by completing the Reward Track.

Most of Arcanist Jaina's sounds are the same as Jaina Proudmoore. Unique, different ones are noted as Unique in References section.