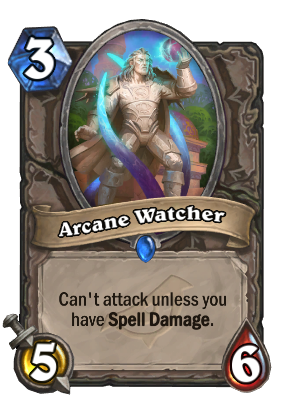 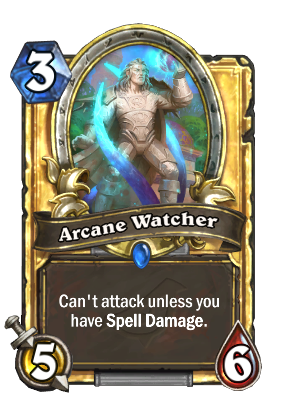 Can't attack unless you have Spell Damage.
Flavor text

Now his watch has ended... until you have Spell Damage.

Arcane Watcher is a rare neutral minion card, from the Rise of Shadows set.

Arcane Watcher can be obtained through Rise of Shadows card packs, or through crafting.

This minion has similar applications as Ancient Watcher, possessing huge stats but being unable to attack in most cases. While it could work in a deck with plenty of Spell Damage granting cards, it's more suitable for Silence Priest decks that can take negate its downsides with cards like Unsleeping Soul. In Wild, Odd Shaman can also use it, constantly summoning Wrath of Air Totem. Putting Velen's Chosen on this card effectively removes its drawback as well.

Arcane Watcher is highly similar in appearance to the statue of Rhonin that was erected in the Eventide district of Dalaran following the Kirin Tor leader's death during the Attack on Theramore Isle.