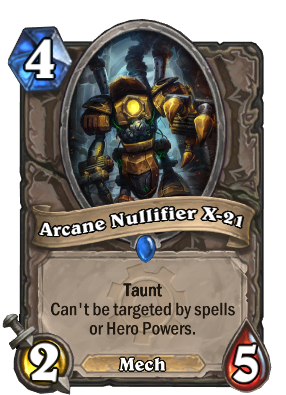 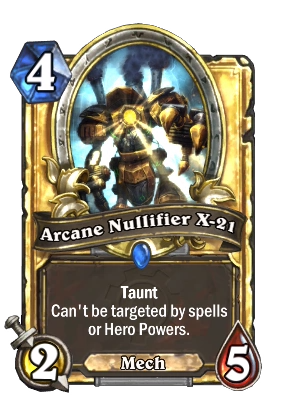 There was some hard talk between gnome magi and engineers about inventing this mech.

Arcane Nullifier X-21 is a rare neutral minion card, from the Goblins vs Gnomes set.

Arcane Nullifier X-21 can be obtained through Goblins vs Gnomes card packs, or through crafting.

This card's "Elusive" ability makes it impossible to remove using single-target spell removal like Soulfire and Sap. Along with its Taunt ability, this forces opponents to use minions to bring it down. The Arcane Nullifier is especially strong against aggressive decks with low-cost minions, as it will likely trade with multiple targets. This is the only minion other than Soggoth the Slitherer to possess both Taunt and the Elusive ability, making it especially effective in this role. Magnetic minions can be very effective in making this minion difficult to remove.

Area of effect spells such as Flamestrike, and random target spells like Deadly Shot and Tinkmaster Overspark can however still be used to remove the Nullifier. Mass Dispel can also allow the opponent to silence the Nullifier, removing its Elusive ability and thus making it vulnerable to other spells. The Nullifier can also be targeted by Battlecries, such as being Silenced by Spellbreaker or Ironbeak Owl or being destroyed by The Black Knight.

Alternatives include the Senjin Shieldmasta (1 Attack more), and the Sludge Belcher (whose Deathrattle is similarly effective at absorbing minion damage). However, neither of these minions possess the Elusive trait.

Arcane Nullifier X-21s are level 28 elite arcane nullifiers that can be found in the Gnomeregan instance.