Hearthstone Wiki
Register
Don't have an account?
Sign In
Advertisement
in: All cards, Wild format cards, Pages with no result queries, Forsaken art

This article is using {{Card template}}.
See Help:Style guide/Card for how to edit this kind of article.
Edit this article
Arcane Missiles
564 • EX1_277
Regular 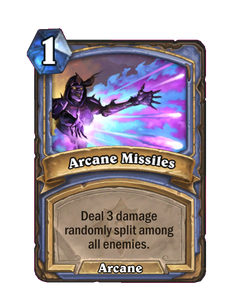 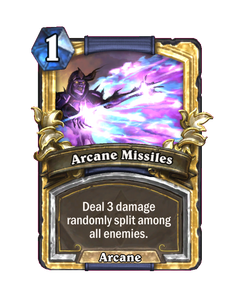 You'd think you'd be able to control your missiles a little better since you're a powerful mage and all. 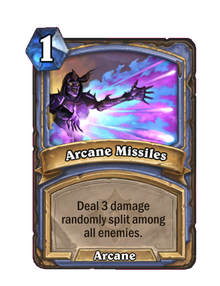 Arcane Missiles is a mage spell card, inducted into the Legacy set, formerly from the Basic set. 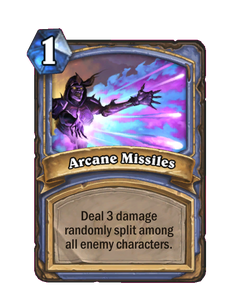 Regular and golden Arcane Missiles are uncraftable and cannot be crafted or disenchanted. 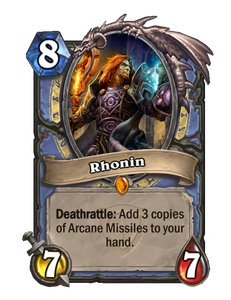 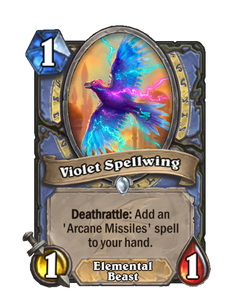 This spell shoots 3 missiles, each one dealing 1 damage to a randomly selected enemy character:

As with any random effect, this spell's usefulness is significantly determined by chance. Under the right conditions this spell is capable of destroying 3 separate characters (more with spell damage).

As a non-targeted effect, this spell is capable of hitting Stealthed targets. This makes this a very useful card against targets like Blood Imp.

Inexperienced mage players often use this spell on the first turn against enemy hero. This is a very bad choice and a waste of the card. The main strength of this spell lies in its randomness and ability to hit several minions. It can be used to remove three 1 Health minions for only 1 mana (more with Spell Damage), or be used against a single target with a good chance of striking it at least once.

Together with the Hero Power Fireblast, this card allows the mage to split damage between several enemies in the most efficient way, and set the stage for further clearing with their minions. It may also be used against a single high Health creature in order to soften it, if no controlled direct damage spells are available.

Note that each point of damage is dealt individually, making it a bad idea to play this with enemy minions such as Gurubashi Berserker or Frothing Berserker on the board.

As an RNG-heavy card, Arcane Missiles often provides either great satisfaction or great frustration. With the right luck, it can send each missile to exactly the right target, becoming a very effective and very cheap card; with the wrong luck, it can send every missile to exactly the wrong target, foiling the mage's plans or even leading to their defeat. This is part of playing the card, and is generally impossible to avoid entirely.

The target of each missile is determined at random from all available enemy targets, including the enemy hero. Note that as a non-targeted effect, this can include Stealthed targets.

If a target is destroyed, that target will no longer be a valid target for the next missile, affecting future probabilities.

"As mage spells go, this one isn't the showiest. Nonetheless, you'll find it quite effective."

In World of Warcraft, Arcane Missiles is a channeled Arcane mage spell that shoots a series of missiles at the target dealing direct arcane damage.