Hearthstone Wiki
Register
Don't have an account?
Sign In
Advertisement
in: All cards, Wild format cards, Pages with no result queries, Golems

This article is using {{Card template}}.
See Help:Style guide/Card for how to edit this kind of article.
Edit this article
Arcane Golem
466 • EX1_089
Regular 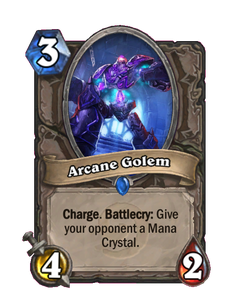 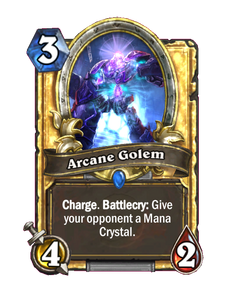 Having Arcane golems at home really classes up the place, and as a bonus they are great conversation pieces. 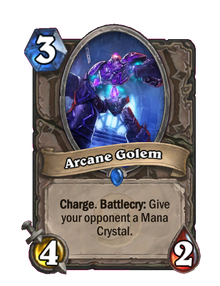 Arcane Golem is a rare neutral minion card, inducted into the Legacy set, formerly from the Classic set. 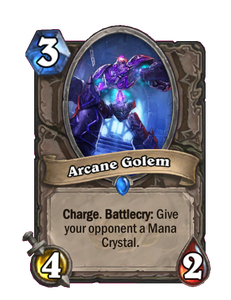 Arcane Golem has slightly above average stats for its cost, but comes at the price of giving your opponent a Mana Crystal. Since an extra Mana Crystal will provide a substantial advantage for the first several rounds of the game, this drawback should not be taken lightly.

One good strategy would be to summon the Arcane Golem on turn 9 or later, where the opponent would already have 10 Mana Crystals next turn, thus removing any drawback from the minion's Battlecry. However, by this point the reduced cost of the card is likely to be irrelevant.

Since its change in Patch 5.0.0.12574 (2016-04-24), this card has lost Charge, and also its place as a game-finishing card in aggro decks. It is now more survivable, but without the ability to immediately deal damage, this card's drawback will usually far outstrip the small stat advantage offered by this card, meaning there are likely better alternatives. In Wild format Dancing Swords has the same cost and stats, but provides card draw instead of a Mana Crystal - likely a smaller advantage, at least during the early game - and through a Deathrattle rather than a Battlecry, delaying the effect.

Note that unlike Wild Growth, Arcane Golem will not grant any extra cards for players who already have 10 Mana Crystals.

Arcane golems are the hulking, magically-imbued robotic constructs created by the high elves during the reign of King Anasterian Sunstrider, and put to use by the blood elves following the race's conversion from quel'dorei to sin'dorei. Their physical build boasts a number of different color schemes depending on the model. The blood elves have put them to the most use, generally using a red-and-gold variant, though also have vermilion and altered fel golem versions in their arsenal.

Comments: "Charge is an ability we've learned to use sparingly. Arcane Golem has been a staple in many aggressive and 'one turn kill' combo decks, and its drawback is rarely relevant. We're addressing both issues by removing Charge and increasing Arcane Golem's Health, while leaving its drawback. Arcane Golem will now be a 3 mana 4/4 with Battlecry: Give your opponent a Mana Crystal."