This article is using {{Card template}}.
See Help:Style guide/Card for how to edit this kind of article.
Edit this article
Arcane Giant
39426 • KAR_711
Regular 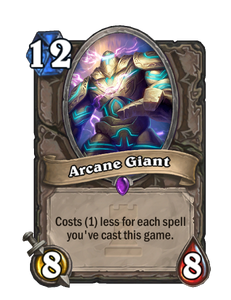 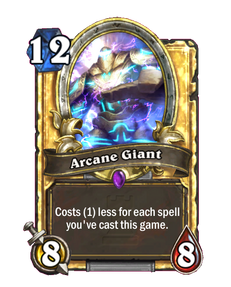 Claims to be drawn to Karazhan because of the ley lines. Actually, just loves Moroes’ cooking. 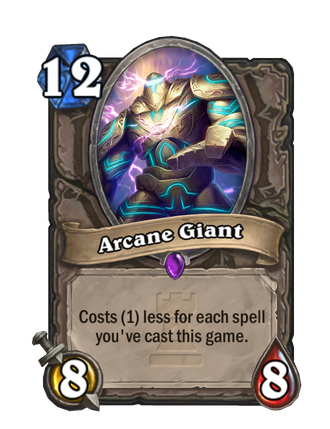 Arcane Giant is an epic neutral minion card, from the One Night in Karazhan set.

For its stats, this is a fantastic card. Regular decks feature at least 6 to 7 spells, which will reduce this card's cost to a minimum of five mana. Optimally, you should try to add many spells to your deck while controlling the board. This card fits well in any spell-oriented deck, especially in decks such as Miracle Rogue and Quest Mage, and has great synergy with Yogg-Saron or

Explore Un'Goro. In fact, This card actually plays a huge part in a win combo in certain variants of Quest Mage - it involves playing two Arcane Giants and a

Alexstrasza next turn and finishing off your opponent.

Arcane Giant is a type of