This article is using {{Card template}}.
See Help:Style guide/Card for how to edit this kind of article.
Edit this article
Arcane Explosion
447 • CS2_025
Regular 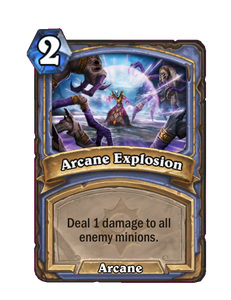 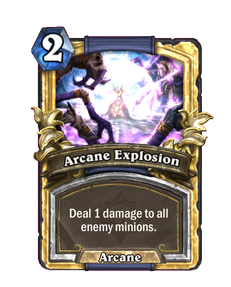 This spell is much better than Arcane Implosion. 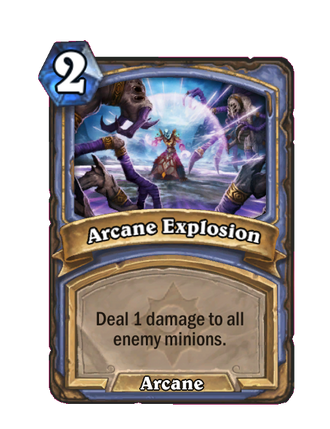 Arcane Explosion is a mage spell card, inducted into the Legacy set, formerly from the Basic set. 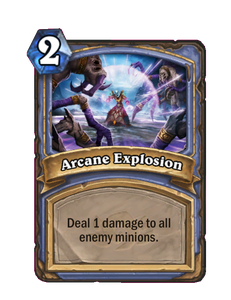 Regular and golden Arcane Explosion are uncraftable and cannot be crafted or disenchanted.

Arcane Explosion is very useful for clearing enemy minions from the board and destroying Divine Shields, and represents one of the mage's main defensive plays against aggro decks. While its low damage makes it primarily useful against low-health minions, with Spell Damage minions the spell can be improved to deal substantial damage to each enemy minion.

This spell is ideally saved until it can be used to deal damage to several opponents, or until Spell Damage can be gained to amplify its effects. With a full board of enemy minions and a couple of spell damage minions on the mage's side, this 2 mana spell can deal more than 20 points of damage in total.

When playing against early-game aggro decks, mages may wish to save this for the mid-game, when the mage's opponent may have the chance to put several of their weaker minions into play at once, in an attempt to overwhelm the mage. This includes 'Berserker' warriors, healing-oriented priests, warlocks and murloc decks.

As a cheap spell, Arcane Explosion can also be used in combination with other spells, such as using

Fireblast or even a second Arcane Explosion to finish off tougher targets.

This card can be replaced by

Twilight Flamecaller, having the same effect while also summoning a 2/2 minion for one more mana.

Arcane Explosion is a mage spell from World of Warcraft. It is an instant AoE effect, used primarily for clearing out low-health trash mobs, and by Arcane mages to fuel their Arcane Barrage spell. It is very effective for dealing AoE damage while moving, and for bringing nearby rogues out of stealth. This card's flavor text is purely humorous: no spell named Arcane Implosion actually exists.