This article is using {{Card template}}.
See Help:Style guide/Card for how to edit this kind of article.
Edit this article
Arcane Artificer
45590 • LOOT_231
Regular 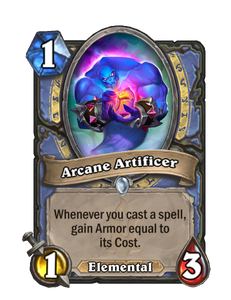 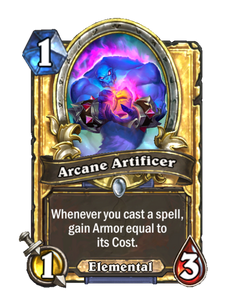 Ethereal armor dissipates in 6 hours which can cause extreme awkwardness for first time buyers. 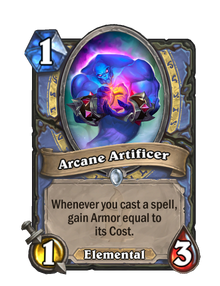 Arcane Artificer is a common mage minion card, from the Kobolds and Catacombs set.

Because of the nonrestrictive mana cost, Arcane Artificer is very easy to play before casting a large spell. Along with the value of the armor, you'll get tempo advantage from the spell cast; Firelands Portal, Meteor, and Flamestrike are all great spells to combo with this minion. You can use this to recover after an Ice Block is broken, or to simply gain a health advantage.

Due to the extremely valuable effect, this minion is a priority target for your opponent. Don't expect it to survive more than one turn, and be sure to make the most of it the turn it's summoned. Having two Arcane Artificers on the field grants twice the armor, allowing you to quickly bulk up. However, be aware that this makes you far more susceptible to board clears.

This card's effect is dependent on the spell's final cost. If the spell's cost is reduced by effects like Sorcerer's Apprentice, then the armor gained is also reduced.