This article is using {{Card template}}.
See Help:Style guide/Card for how to edit this kind of article.
Edit this article
Aranasi Broodmother
52058 • DAL_185
Regular 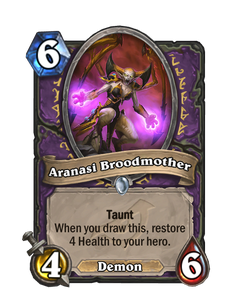 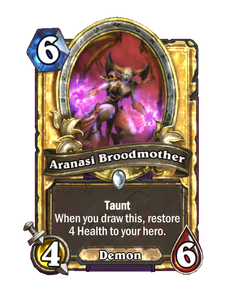 Dimensions: Full • 330 x 410px
Taunt
When you draw this, restore 4 Health to your hero.
Flavor text

She's got a big brood and a big mood. 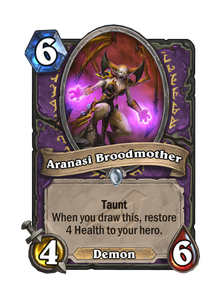 Aranasi Broodmother is a common warlock minion card, from the Rise of Shadows set.

This card has decent stats as a defensive Taunt minion, and its effect provides Warlocks with healing that is essentially free, if unpredictable.

Combos well with Plot Twist, giving a chance to heal off the effect again.

The aranasi are a race of arachnid demons. Their origins are not fully understood - scholars who have studied the Burning Legion speculate that they are the remnants of a forgotten race on a world long ago conquered by the armies of Sargeras.

Some aranasi appear to look like typical spiders, while others have a partially humanoid appearance resembling nerubians or fire spiders, and some have an even more humanoid appearance, standing on two legs with wing-like structures on their backs. At least some aranasi have potent venom sacs that secrete violent toxins.