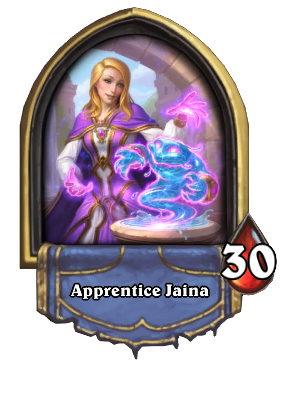 Apprentice Jaina is an alternate hero for the

Apprentice Jaina is unavailable to new players. It's unknown if she will become available again.

Apprentice Jaina was obtained by purchasing the Tavern Pass and reaching level 5 in the Madness at the Darkmoon Faire' Rewards Track.

Once unlocked and selected for use, Apprentice Jaina replaces Jaina Proudmoore whenever playing with a Mage deck, as well as:

When viewed in the collection, Apprentice Jaina has the following flavor text:

Even when she was just starting out, Jaina knew that if you add a little water, anything will grow!
Earnable after purchasing the Tavern Pass.

Most of Apprentice Jaina's sounds are the same as Jaina Proudmoore. Unique, different ones are noted as Unique in References section.