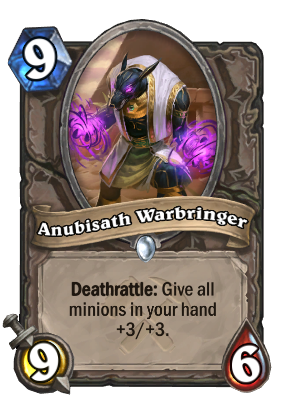 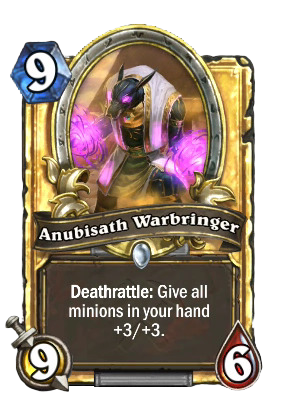 Deathrattle: Give all minions in your hand +3/+3.
Flavor text

Some dogs will bring you a bone or a squeaky toy. This one brings war!

Anubisath Warbringer is a common neutral minion card, from the Saviors of Uldum set.

Anubisath Warbringer can be obtained through Saviors of Uldum card packs, or through crafting.

Although the Deathrattle is powerful, the minion's high mana cost makes it far too slow and restrictive. Anubisath Warbringer is extremely vulnerable to Silence and transform effects.

Anubisath Warbringer can be used with Anka, the Buried. Its potent Deathrattle is much easier to abuse at one mana, and it can provide a buff to other minions Anka changed the stats of. Necrium Apothecary can be used to abuse its Deathrattle by using it 4 turns earlier than intended. It also works very well with other cards that can create copies of it without playing it like Dollmaster Dorian, Fel Lord Betrug, and Zerek's Cloning Gallery.

It's much more powerful in Arena; when fighting the opponent for the late value game, the massive +3/+3 it provides will let you out-trade the opponent in the long run, especially if you have cards stockpiled.

The anubisaths are titan-forged giants made of obsidian. Originally assigned by Highkeeper Ra to safeguard the fortresses of Uldum and Ahn'Qiraj, the ones guarding the latter were eventually enslaved by the qiraji.

Anubisath Warbringers were anubisaths that could be summoned by Resonating Crystal Formations during the one-time Gates of Ahn'Qiraj world event.