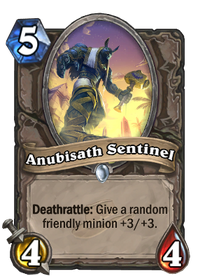 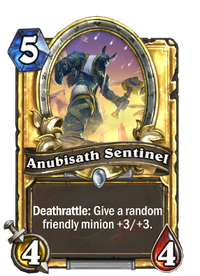 Deathrattle: Give a random friendly minion +3/+3.

He's actually a 1/1 who picked up the hammer from the last guy.

Anubisath Sentinel is a common neutral minion card, from the League of Explorers set.

Two copies of regular Anubisath Sentinel are obtained by defeating Sun Raider Phaerix, the second boss in The League of Explorers's first wing, the Temple of Orsis.

As a Wild format card, both regular and golden versions of Anubisath Sentinel can also be crafted for the following amounts:

This card is good for buffing another minion. It is especially useful with taunt and only one other minion, since that minion will be guaranteed to be buffed. With taunt, this card also works excellent with the Paladin secret Avenge, since it has an additional buff that could be game-winning.