This article is using {{Card template}}.
See Help:Style guide/Card for how to edit this kind of article.
Edit this article
Anub'arak
2586 • AT_036
Regular 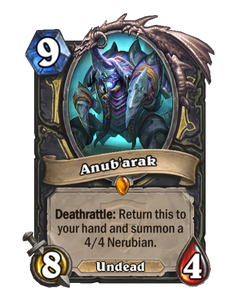 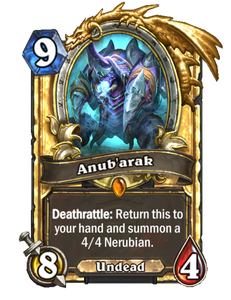 Was actually a pretty nice guy before, you know, the whole Lich King thing. 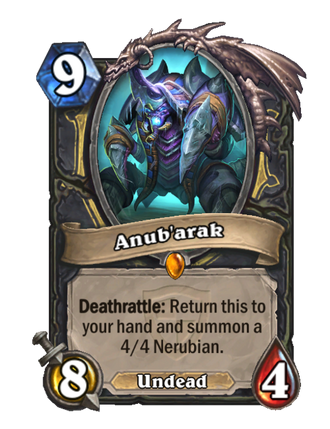 Anub'arak is a legendary rogue minion card, from the Grand Tournament set. 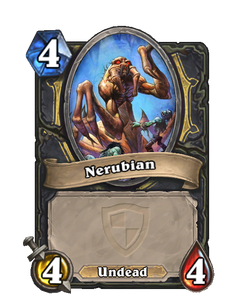 Best used in a control rogue deck. If your opponent cannot neutralize its effect with Silence or Transform, you will generate board value each time Anub'arak gets destroyed. Also, with the large amount of Rogue Deathrattle cards available, this will fit nicely into a Rogue Deathrattle deck.

"I was king of this empire once, long ago. In life I stood as champion. In death I returned as conqueror. Now I protect the kingdom once more. Ironic, yes?"

Anub'arak was the last king of the nerubian empire of Azjol-Nerub. He was among the nerubians slaughtered in the War of the Spider and later raised by Ner'zhul the Lich King as an undead crypt lord to do his bidding. When the Lich King began losing his powers, Anub'arak assisted Arthas Menethil in reaching Icecrown before

Illidan Stormrage's forces. For years, the undead nerubian continued carrying out his master's will in the ruins of his former kingdom until he was slain by adventurers. He was later raised once more and relocated to the caverns below Icecrown to plague the Argent Tournament, but the so-called traitor king met his final end at the hands of adventurers partaking in the tournament.