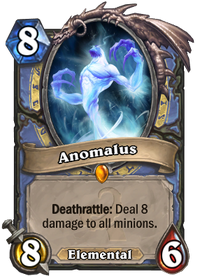 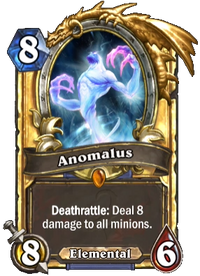 Anomalus is a legendary mage minion card, from the Whispers of the Old Gods set.

Anomalus can be obtained through Whispers of the Old Gods card packs, or through crafting.

Due to the huge amount of damage it deals, Anomalus Deathrattle effect usually kills all minions without Divine Shield. However, due to this effect being a Deathrattle, the opponent will often be able to control when it goes off. Ideally, this minion works best on spell-heavy decks, but its high mana cost, delayed effect, and low health makes it difficult to use.

With Frost Lich Jaina, Anomalus can heal a massive amount of health that rivals Reno Jackson from its Deathrattle.

Anomalus is a gigantic arcane elemental boss. He came into being when the Rift formed due to the high amounts of magical energy streaming through the Nexus daily. He was used as one of the guards to the Nexus and to Keristrasza's prison. Now, Anomalus seems to have gone out of control as his Chaos Rifts and lesser Arcane elementals are attacking the blue dragonflight.