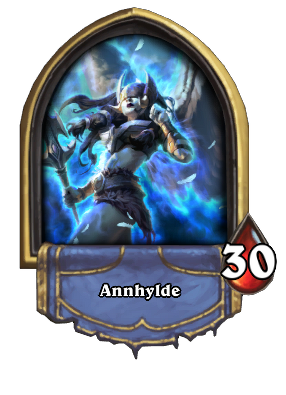 Annhylde is an alternate hero for the

Annhylde is available for players that bought the Tavern Pass and reach level 25 in the Rewards Track.

Once unlocked and selected for use, Annhylde is used as the hero whenever playing with a warrior deck. Annhylde comes with her own portrait and features a animated Hero Power.

When viewed in the collection, Annhylde has the following flavor text:

It turns out that guardian angels can also be grim reapers. Earnable after purchasing the Tavern Pass.

Annhylde the Caller is a part of the Ingvar the Plunderer encounter in Utgarde Keep. Upon Ingvar's death, she resurrects him and begins phase two of the fight.

After the death of Lich King Arthas Menethil, Sylvanas Windrunner committed suicide by falling from the top of Icecrown Citadel. Sylvanas was horrified to find herself condemned to the same afterlife as Arthas, but the Val'kyr offered to restore her if she would make a pact binding them to her service (rather than that of the dormant Lich King Bolvar Fordragon). Annhylde sacrificed herself to bring Sylvanas back while her eight remaining sisters sealed the pact.