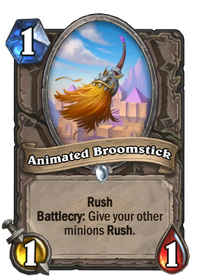 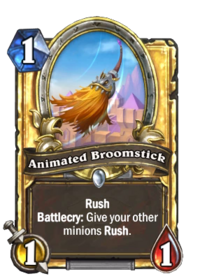 Rush
Battlecry: Give your other minions Rush.

Animated Broomstick is a common neutral minion card, from the Scholomance Academy set.

Animated Broomstick can be obtained through Scholomance Academy card packs, through crafting, or as an Arena reward.

In aggressive decks, one typically would not use a card that gives your other minions rush, as you typically want plenty of Rush minions on the board already. The Animated Broomstick is a card that is best in decks that have larger and slower minions. Battlecries like Archwitch Willow, Galakrond, the Wretched, or Steeldancer, and spells that can summon large minions from your deck like Commencement can all enjoy giving the new minions immediate impact on the board.