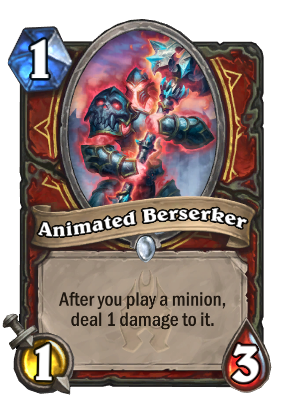 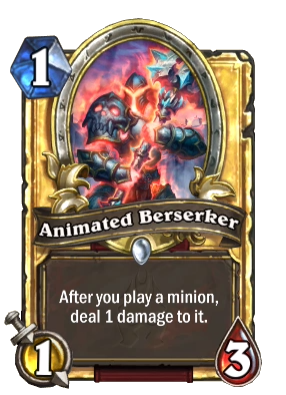 After you play a minion, deal 1 damage to it.
Flavor text

He'd be a lot easier to animate if he would just stand still.

Animated Berserker is a common warrior minion card, from the Knights of the Frozen Throne set.

Animated Berserker can be obtained through Knights of the Frozen Throne card packs, or through crafting.

Animated Berserker has a great defensive stat arrangement, with a strong synergistic ability, allowing you to curve it into Enrage minions as well as minions that benefit from being damaged such as Armorsmith and Acolyte of Pain.

It should be noted, that in Wild format, Animated Berserker does not have as much synergy with Grim Patron as may be assumed, due to its effect requiring you to play a minion for it to activate, rather than summon one.

Animated Berserker is a fairly poor card in the Arena, as it will rarely have enough synergy with the rest of your deck, causing its ability to become a fairly large downside.

The Animated Berserker is unique to Hearthstone. It is a suit of armor animated by magical energy.[1]