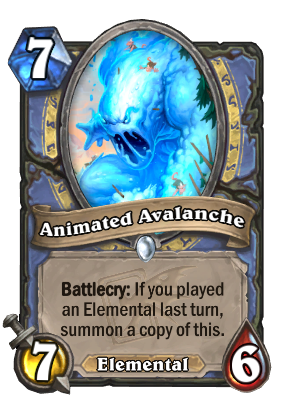 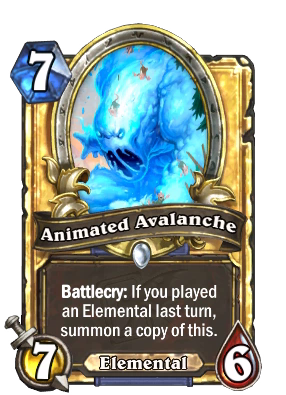 Battlecry: If you played an Elemental last turn, summon a copy of this.
Flavor text

Always sliding down mountains because it can't stop talking with its hands.

Animated Avalanche is a common mage minion card, from the Galakrond's Awakening set.

Animated Avalanche is a powerful end-game play in an Elemental Mage deck. With the Battlecry triggered, it creates 14 damage on the field, split between two fairly large 6-health bodies. The card can be devastating following up Mana Giant or Mountain Giant, other large Elementals that can be played on curve. Animated Avalanche is also a great trigger for Elemental Allies.

Elemental Evocation can be used to lower Animated Avalanche's cost, getting it out on turn 5 or alongside a spell like Frostbolt to maintain tempo.