Hearthstone Wiki
Register
Don't have an account?
Sign In
Advertisement
in: All cards, Wild format cards, Pages with no result queries,
and 3 more

This article is using {{Card template}}.
See Help:Style guide/Card for how to edit this kind of article.
Edit this article
Animal Companion
437 • NEW1_031
Regular 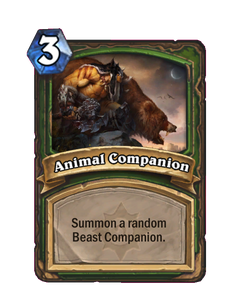 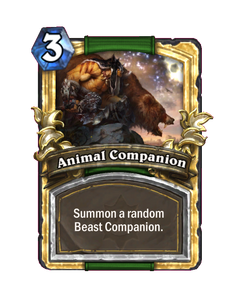 You could summon Misha, Leokk, or Huffer! Huffer is more trouble than he's worth. 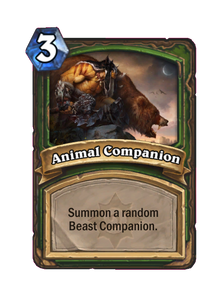 Animal Companion is a hunter spell card, inducted into the Legacy set, formerly from the Basic set. It randomly summons one of three possible minions: Huffer, Leokk or Misha. 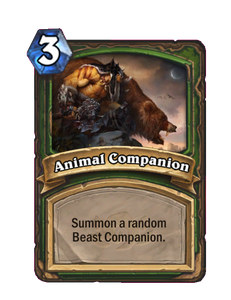 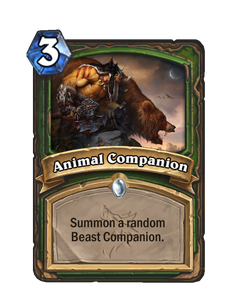 Regular and golden Animal Companion are uncraftable and cannot be crafted or disenchanted. 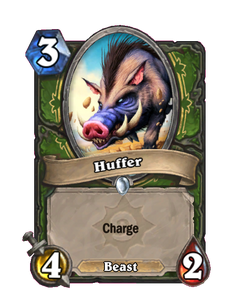 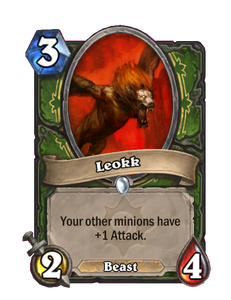 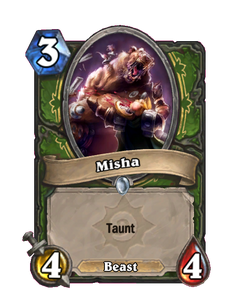 Animal Companion randomly summons either Misha, Leokk or Huffer, each uncollectible 3-cost Beast minions. Although you cannot choose or predict which minion will be summoned, all three are more mana-efficient than collectible 3-mana minions. They maintain their mana efficiency if "returned" to your hand, since each can be summoned back for 3 mana.

This spell can be used to obtain early board presence and apply pressure to your opponent, forcing them to deal with these early threats. Since these minions are all beasts, they also synergize with the various hunter cards that benefit from having beasts in play, such as Scavenging Hyena, Kill Command, Stablemaster or even Ram Wrangler.

As a spell, Animal Companion is able to serve to maintain board presence when playing Spell Hunter.

Call of the Wild is a more powerful but more expensive alternative means of summoning the companions.

Huffer is versatile and can be useful in almost any situation. Huffer is very efficient at outputting damage and can pose an enormous threat to a slower deck. Paired with Houndmaster the next turn, Huffer can efficiently get rid of its issue with low health. In wild, Crackling Razormaw can offer significant bonuses which fit into Huffer's style of play very much, with Rocky Carapace eliminating the possible health weakness which the opponent can take advantage of to make better trades, Lightning Speed not only increases Huffer's damage output, but also adds a bonus to all future buffs, while Crackling Shield can protect Huffer from a trade to gain tempo.

Huffer is more efficient than Wolfrider, as they both cost 3 mana and have Charge, but Huffer has +1/+1 in stats when compared to Wolfrider.

Leokk is the most situational out of the three animal companions. Leokk is only useful when multiple other minions are controlled at the same time. Leokk's aura is most beneficial to large amounts of small minions, most notably, Leokk can help kill large minions with Unleash the Hounds, Springpaw, and Snakes from Snake Trap. In an beast focused deck, Leokk can help serve the purpose of Timber Wolf, just at a higher cost and with a sturdier body. Leokk is generally not efficient at trading, but it can do the job in the early game, being able to efficiently trade into minions such as Sorcerer's Apprentice, Acidic Swamp Ooze, and Flame Imp, but is very vulnerable if played later than turn 3, as popular minions such as Kirin Tor Mage, Spellbreaker, Houndmaster, and Twilight Drake can all kill Leokk while still leaving a threatening body on the field, thus, protecting Leokk later on in the game can be quite beneficial.

Leokk is more efficient than Raid Leader as they both cost 3 mana and grant other friendly minions +1 attack, but Leokk has +1 health in stats when compared to Raid Leader.

Misha is one of the most efficient 3-drops in the game: it is very favorable when trading, has a sturdy body, and can protect other important minions. Although Misha, when compared to Huffer, is not able to provide an immediate board impact, Misha still has the capability to gain a huge boost in tempo. Later on in the game, Misha becomes less favorable as 4/4 bodies aren't as impactful as they are in the early game. With 4 health, Misha is able to kill many early minions and survive, such as Blink Fox and Augmented Elekk, however, Misha is still vulnerable to removal such as Eviscerate and Vendetta.

Misha is more efficient than Ironfur Grizzly, Silverback Patriarch, Fierce Monkey, Hired Gun, and Squirming Tentacle, with Misha being better than them in varying degrees of stat difference.

Misha, Leokk and Huffer are all known companions of Rexxar.

Misha is a level 72 elite named brown bear that is a sworn companion of Rexxar.

Rexxar's trusted companion, Misha is a bear who will fight at Rexxar's side whenever she is called upon. Misha battles ferociously, and loyally follows Rexxar to every location he travels to. Rexxar is very protective of Misha when they enter civilized areas, and ensures that the bear stays close to him.

Misha accompanied her master in the aftermath of the Third War in the battles of Kalimdor against Daelin Proudmoore. Years later, Misha found the body of an orc named Byrok. She carried him on her back to Orgrimmar.

She was later seen by her master's side in the Stonetalon Mountains, Desolace, and Feralas. Misha accompanied Rexxar through the Dark Portal to Outland and could be found in the Thunderlord Stronghold in the Blade's Edge Mountains.

Misha continues to follow her master on the Broken Isles during the Burning Legion's third invasion of Azeroth. She is also briefly seen in Undercity at a ceremony hosted by Warchief Sylvanas Windrunner. Though traditionally by her master's side during the war against the Alliance, Misha wasn't part of Rexxar's mission to break out Lady Priscilla Ashvane out of her prison.

Leokk is a level 70 elite wyvern found in Blade's Edge Mountains. He is one of several beasts belonging to Rexxar.

Shortly after Rexxar arrived in Blade's Edge Mountains, he was attacked by Bladespire ogres. Although Rexxar escaped after slaying many, Leokk was taken prisoner. Thankfully, with the help of Spirit and a Horde adventurer, Leokk was located and freed.

Huffer is a boar companion of Rexxar. He is summoned by his whistle.

Huffer accompanied Rexxar to Blade's Edge Mountains, where he helps a Horde adventurer steal {{wow|Grulloc's Sack]] by leading Grulloc on a merry chase to distract him.