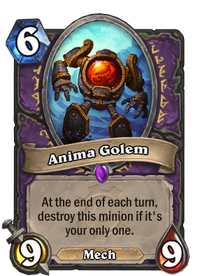 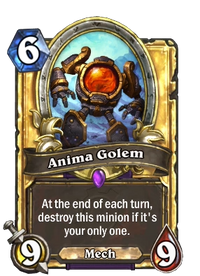 At the end of each turn, destroy this minion if it's your only one.

The Dark Animus is evil and mysterious and huge and unable to write sentences that utilize proper grammar.

Anima Golem is an epic warlock minion card, from the Goblins vs Gnomes set.

Anima Golem can be obtained through Goblins vs Gnomes card packs, or through crafting.

This card shines with "sticky" minions that are hard to fully remove from the board due to their Deathrattles (Haunted Creeper, Nerubian Egg, etc). It's particularly strong with Dreadsteed, which cannot be removed at all without Silence. On that note, Silencing Anima Golem itself can remove its drawback.

If you plan to play this early, focus on filling your field with minions rather than building up card advantage with Life Tap. Do not use this card with Summoning Portal. While it may be tempting for the early power and the chance to develop your field with other minions, you increase the backlash if the fragile Portal is destroyed.

Use cheap Stealth minions or ones with Elusive to make this minion more survivable.

Anima Golems are blood golems encountered during the fight with Dark Animus, the ninth boss in the Throne of Thunder. When they are destroyed, the fluid that animates them moves onto larger vessels, until it finally assembles into Dark Animus.

Blood golems, also known as anima golems, are mechanical creations of Archritualist Kelada, under the Thunder King's command, and were forged in the Throne of Thunder. The small golems serve the great Dark Animus. After its defeat, the blood elves acquired the Dark Animus' power source and began empowering blood golems of their own.