This article is using {{Card template}}.
See Help:Style guide/Card for how to edit this kind of article.
Edit this article
Angry Chicken
1688 • EX1_009
Regular 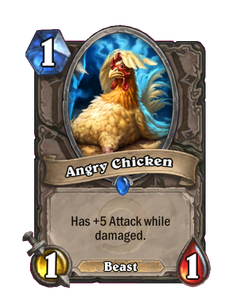 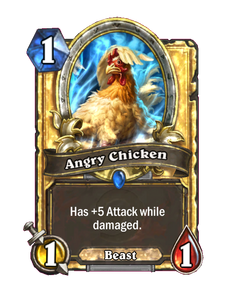 There is no beast more frightening (or ridiculous) than a fully enraged chicken. 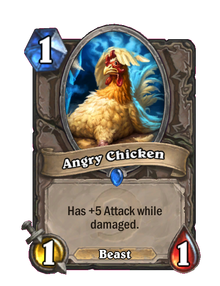 Angry Chicken is a rare neutral minion card, inducted into the Legacy set, formerly from the Classic set. 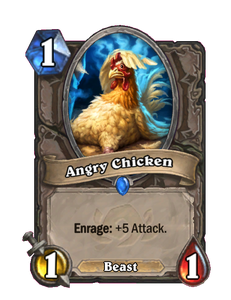 In order to benefit from its Enrage effect, the player must first find a way to raise the total health of this minion. Without this, the Angry Chicken is worse than most other 1 mana minions (especially collectible ones) and more on par with 0-mana collectibles who also have 1/1 stats. For this reason, this minion is best played in a deck filled with minion improvements, particularly health-boosters.

In addition to attacking any 1-attack minions the enemy has in play (they'll probably avoid attacking your Health-buffed chicken if they're smart, unless they can finish it off with a non-minion that turn) to trigger the chicken for followup attacks, 1-damage effects (since fellow 1-attack minions can't self-attack, and enemies will probably avoid it) can be useful here like for triggering the enrage, such as the mage hero power Fireblast or Cruel Taskmaster who will give an extra damage bonus on top of the chicken's inherent one.

Once its health is increased and the enrage effect triggered, this minion combos well with other effects such as Taunt for strong clearing power, or Windfury for massive damage.

In the case of the +5 attack being neutralized by a card like Humility being played afterward (sets attack to 1) it is possible to regain the bonus by healing the chicken back to full health and having them injured a second time. As the most recent enchantment takes priority, the 2nd Enraged will override Humility.

The Angry Chicken is generally considered a poor choice for most decks. However, in combination with the right effects, it can be extremely powerful. For example, commentator TotalBiscuit, in his "Lord of the Arena" video series (Episode 49, at 6:22), ended up with an Angry Chicken with 8 Attack after buffing it with Mark of the Wild and Enraging it with a Mad Bomber.