Hearthstone Wiki
Register
Don't have an account?
Sign In
Advertisement
in: All cards, Wild format cards, Pages with no result queries, Ancients

This article is using {{Card template}}.
See Help:Style guide/Card for how to edit this kind of article.
Edit this article
Ancient of War
1035 • EX1_178
Regular 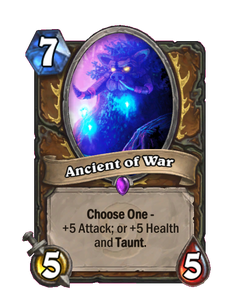 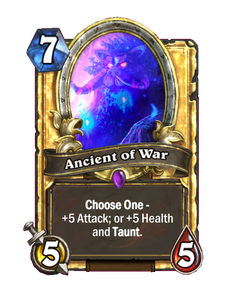 Young Night Elves love to play "Who can get the Ancient of War to Uproot?" You lose if you get crushed to death. 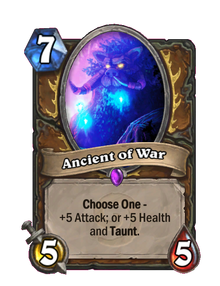 Ancient of War is an epic druid minion card, inducted into the Legacy set, formerly from the Classic set. 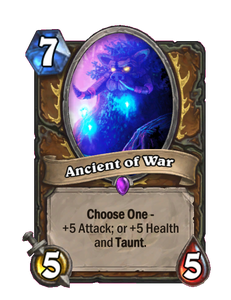 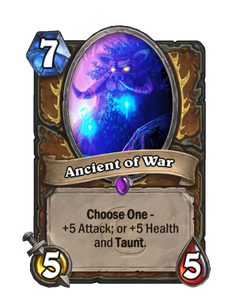 Two copies of regular Ancient of War are obtained for raising druid to level 9.

Two copies of golden Ancient of War (Core) are obtained for winning 250 games as druid.

Ancient of War (Core) is uncraftable and cannot be crafted or disenchanted. 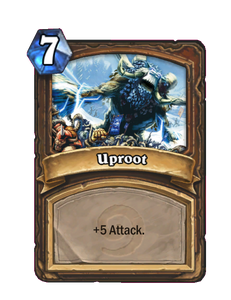 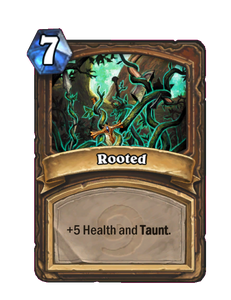 Ancient of War's Choose One mechanic makes it a versatile defender and finisher alike. It is most commonly played as a defensive option, as the combination of Taunt, 10 Health and a respectable 5 Attack makes it a solid wall which can decimate an opponent's minions. Alternatively, an Ancient with 10 Attack can quickly end the game if not dealt with.

Note that as the Choose One mechanic is applied as a buff, Silence effects will remove them and return the Ancient to its base 5/5 state. It also means that if Ancient of War is re-summoned by Kel'Thuzad, the Ancient will simply come back as a 5/5 regardless of his original state before dying. Besides this vulnerability it is generally better than most other Taunts.

One of the toughest types of ancient, ancients of war are mighty nature elementals often found defending night elf settlements such as Darnassus, or supporting Alliance forces in battle.

Embodied in these ancient guardians are the spirits of courage and determination that are necessary to propel the will of the night elves. Calling upon the long forgotten energies of conflicts from ages past, these guardians provide a link to the brutal side of nature and the cycle of life and death that rules all creation.

During the third war these ancients were in charge of training Archers and Huntresses and the assembling of Ballista and Glaive Throwers, as well as assisting in research regarding the abilities of those groups. In more recent times they have been called into action to aid the Alliance in battle-torn zones such as Alterac Valley and Ashran.