This article is using {{Card template}}.
See Help:Style guide/Card for how to edit this kind of article.
Edit this article
Ancient of Lore
920 • NEW1_008
Regular 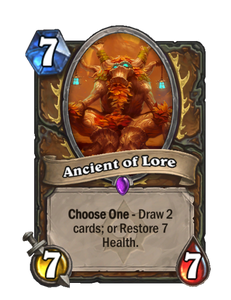 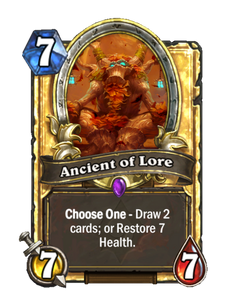 Go ahead, carve your initials in him. 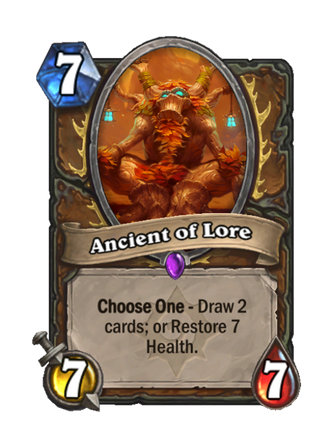 Ancient of Lore is an epic druid minion card, inducted into the Legacy set, formerly from the Classic set. 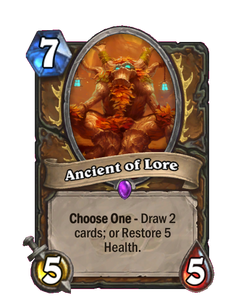 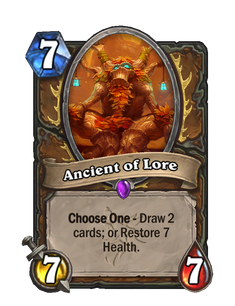 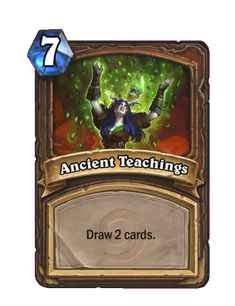 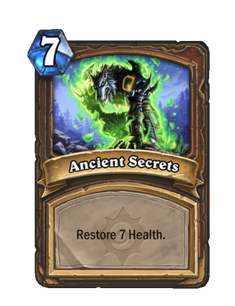 A powerful late game card, Ancient of Lore has unusually low stats for its cost but more than compensates with highly useful effects when played. Use its Choose One effect to select the effect which will benefit you the most. Being able to draw a card with

Ancient Teachings is usually the better option and should be used to increase card advantage when you are ahead. Alternatively,

Ancient Secrets can provide you a sizeable heal when you suspect your opponent has enough damage to burst you down.

The ancients of lore are the keepers of wisdom, and the living keys necessary to unlock nature’s most guarded secrets. Contact with the venerated druids of the claw is only made possible through the existence of this enlightened sentinel. The knowledge of this ancient is necessary also to enable communion with the enigmatic, free-spirited dryads.

An ancient of lore seems to be in a constant state of autumn - its leaves are gold and scarlet. Lanterns hang from its branches, symbolizing the light of wisdom. Ancients of lore instruct nascent night elf druids and priests about the ways of magic and the secrets of nature. Ancients of lore prefer to use their spells to bolster their allies, but in times of great conflict they turn their magic abilities and their powerful arms on their enemies.

Ancients are in charge of keeping history and wisdom. The ancients of lore are also responsible for the training of dryads and druids of the claw and the research of new types of magic and skills for those groups.

Commentary: "Drawing cards is powerful in Hearthstone, and Ancient of Lore easily found its way into nearly every popular Druid deck. We’d like Druid players to feel that other cards can compete with Ancient of Lore, so we’ve reduced the number of cards drawn from 2 to 1."