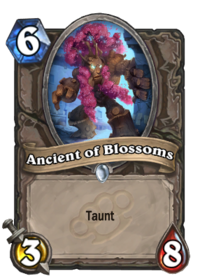 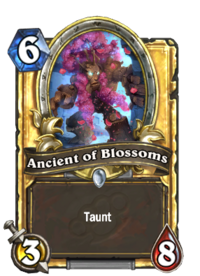 His new shampoo is really working!

Ancient of Blossoms is a common neutral minion card, from the Mean Streets of Gadgetzan set.

Ancient of Blossoms can be obtained through Mean Streets of Gadgetzan card packs, or through crafting.

The Ancient of Blossoms has poor stats for its cost, only possessing 2 more Health than the 1 mana cheaper Fen Creeper while also possessing 3 less Attack than the 1 mana more expensive Bog Creeper, making it less likely to trade favorably with late game minions. The Ancient of Blossoms can work well with Taunt-related cards such as Bolster and Stolen Goods, but is ultimately a quite poor card on its own compared to the two aforementioned Creepers.