This article is using {{Card template}}.
See Help:Style guide/Card for how to edit this kind of article.
Edit this article
Ancient Watcher
605 • EX1_045
Regular 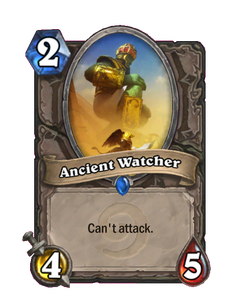 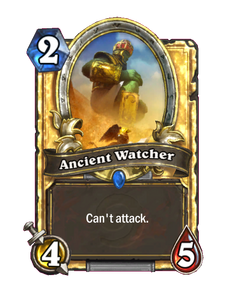 Why do its eyes seem to follow you as you walk by? 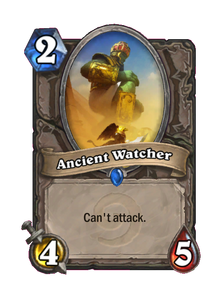 Ancient Watcher is a rare neutral minion, inducted into the Legacy set, formerly from the Classic set. 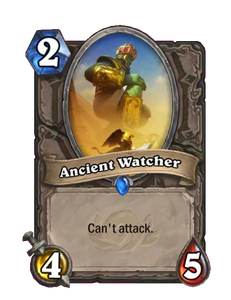 The Ancient Watcher comes into play with 4/5 but an inability to attack and may be used in a number of ways.

Abilities that give minions taunt such as Sunfury Protector, Defender of Argus and Mark of the Wild make it one of the cheapest mana:hp investments for a taunt.

Another option is to to cast a Silence which removes the inability to Attack, making it a potent attacking minion in its own right.

Additionally, the Ancient Watcher can be useful as a low cost sacrifical minion for warlocks to use with Shadowflame or Void Terror.

Unless able to make use of one of the above strategies, this card is generally a waste of mana. However, even without the ability to attack the minion may serve as a useful soft taunt, with opponents potentially wasting minions or removal effects on the Watcher in anticipation of one of the above strategies being put into play. It can also serve as a tank for absorbing random damage effects, such as from Mad Bomber or Knife Juggler.

This card's art depicts one of the numerous living giant statues in the Tol'vir zone of Uldum. Creatures like the one on the card are seen in numerous pyramids including the dungeon Halls of Origination. The card also shows a desert and a Tol'vir statue below the actual Ancient Watcher. The ancient watchers encountered are also either malfunctioning or pretending to be inactive, until you come close enough for them to attack you.