This article is using {{Card template}}.
See Help:Style guide/Card for how to edit this kind of article.
Edit this article
Ancient Void Hound
60143 • SCH_354
Regular 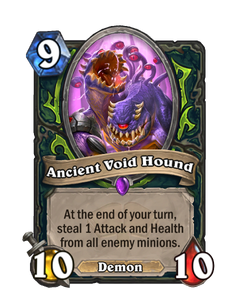 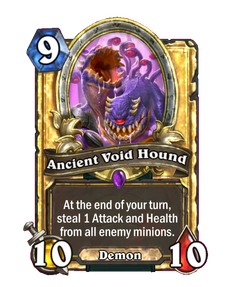 Dimensions: Full • 330 x 410px
At the end of your turn, steal 1 Attack and Health from all enemy minions.
Flavor text 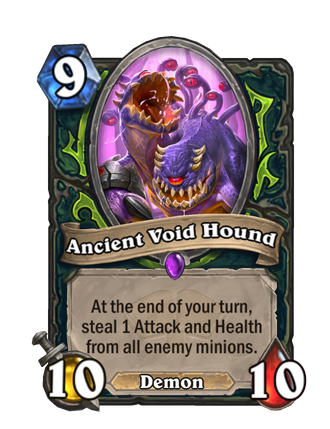 Ancient Void Hound has an incredibly strong effect on a large body - but it's susceptible to hard removal and quite expensive to play. If you want to use it in a deck, utilizing synergies with cards like

Pit Commander make it easier to pay less Mana for it or even pull it from your deck for free.

Void hounds, also known as void terrors, are huge and extremely powerful two-headed demons that roam the trackless wastes of the

Twisting Nether like ravenous beasts. They possess a nearly unlimited source of magical energy. Little information is available on these demons in Dalaran libraries; their appearances are infrequent, and their defeats even more so.

While most of these creatures are classified as demons in-game, some are instead classed as aberrations, and at least one void terror has been seen being summoned by wielders of Void magic.