This article is using {{Card template}}.
See Help:Style guide/Card for how to edit this kind of article.
Edit this article
Ancient Mysteries
54772 • ULD_726
Regular 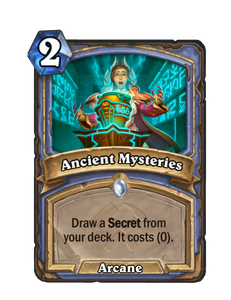 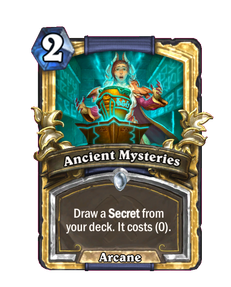 I'm not saying it was aliens, but it was TOTALLY aliens! 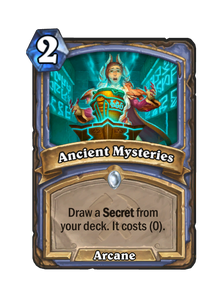 Ancient Mysteries is a common mage spell card, from the Saviors of Uldum set.

Ancient Mysteries acts as both as a way to tutor Secret cards and discount it. It's good for both secret-based decks and with cards that take advantage of playing multiple spells in succession like Mana Cyclone. You could also choose to save the Secret for later so that you can combo it with Arcane Flakmage or Cloud Prince.

In Wild, it competes with Arcanologist. While it doesn't provide early game tempo on a minion, it makes up for it with the mana discount. Both are, however, generally weaker than Mad Scientist, who provides a body and the value of a "free" secret.