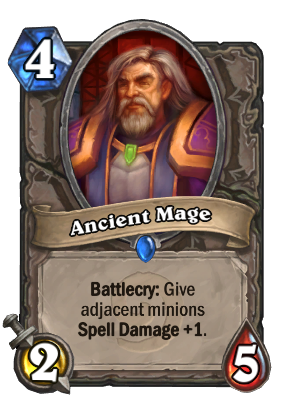 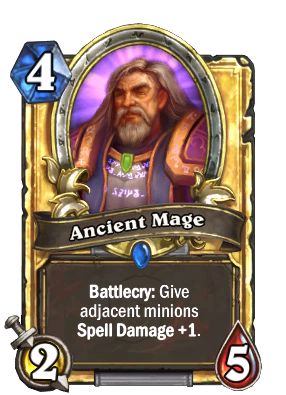 Sometimes he forgets and just wanders into someone else's game.

Ancient Mage is a rare neutral minion card, inducted into the Legacy set, formerly from the Classic set. 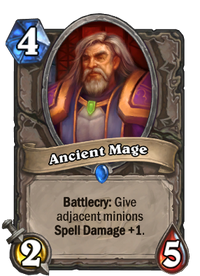 Ancient Mage can be obtained through Classic card packs, or through crafting.

Ancient Mage's combat stats of 2/5 are low for its mana cost of 4, but its ability is potentially powerful. By placing Ancient Mage in between two other minions, you can gain 2 Spell Damage. Ancient Mage is an excellent tool for decks consisting of many damaging spells.

Ancient Mage's Battlecry grants an enchantment to the two adjacent minions. Unlike ongoing effect minions like Dire Wolf Alpha, the enchantments are permanent and will not be re-placed by repositioning minions. The enchantment will stack with any existing Spell Damage on the buffed minions.

Attack
Where am I?

Archmage Ansirem Runeweaver is a member of the Council of Six, the leaders of the Kirin Tor of Dalaran.