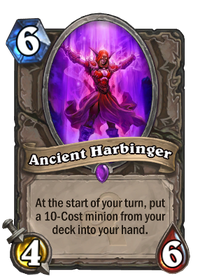 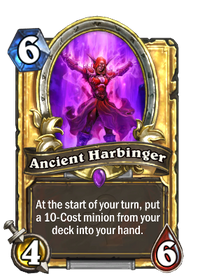 At the start of your turn, put a 10-Cost minion from your deck into your hand.

"honey, can u run down to the store and pick up some 10 cost minions? thx"

Ancient Harbinger is an epic neutral minion card, from the Whispers of the Old Gods set.

Ancient Harbinger can be obtained through Whispers of the Old Gods card packs, or through crafting.

This card has a very limited range of eligible cards, and a clear synergy with the Old Gods. It works especially well with C'Thun due to its key role in related decks, ensuring it doesn't remain at the bottom of the deck for the entire game. It also has synergy with Doomcaller, shuffling C'thun into your deck and allowing this to be useful even when drawn later in the game.. However, opponents may take advantage from knowing that a key minion like C'Thun is in your hand, giving them time to prepare a counter.

This card has low stats compared to basic minions like Boulderfist Ogre, and only has effect if it survives until your next turn while your deck contains a 10-cost minion. An idea is playing this in combination with, for instance, Conceal or Ancestral Spirit, to increase its chance of survival by making it harder to remove.

The following table lists all collectible 10-Cost minions available in Standard format, representing the range of viable targets for this card's triggered effect.

Given her capacity for summoning Old Gods from the depths of the player's deck, this harbinger may be in the service of the ancient horrors.

Old Gods, like Y’Shaarj, enjoy arriving in terrifying style, and no one portends their ominous appearance quite like the Ancient Harbinger. This super cultist specializes in beckoning only the mightiest of Tavern denizens. Mere mortals must wait in line to join the party, but the Ancient Harbinger ensures that the Old Gods receive the VIP** treatment they deserve.[6] 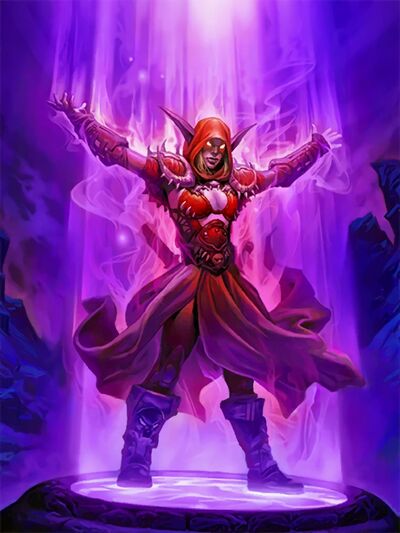