This article is using {{Card template}}.
See Help:Style guide/Card for how to edit this kind of article.
Edit this article
Ancient Brewmaster
186 • EX1_057
Regular 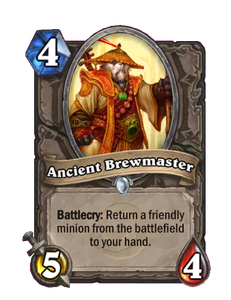 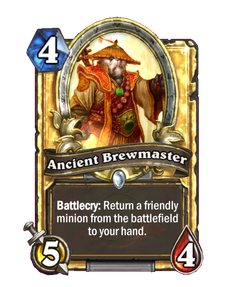 Most pandaren say his brew tastes like yak. But apparently that's a compliment. 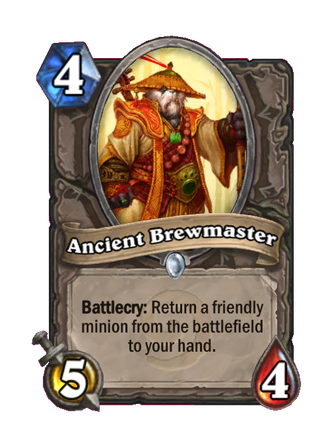 Ancient Brewmaster is a common neutral minion card, inducted into the Legacy set, formerly from the Classic set. 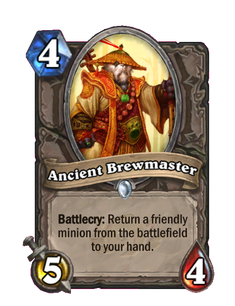 There are two main strategic uses for return effects. The first is when used in conjunction with a minion with a useful Battlecry, such as

The second is to return a minion to its original stats, and remove any enchantments. Ideally, use the minion to attack, allowing it to deal and take damage, then return it to your hand allowing you to play it again at full health.

Return effects are also useful when used in combination with a minion with Charge, effectively granting it Windfury for that turn, and removing any damage incurred from its first attack.

When combined with temporary mind control effects such as

Potion of Madness and

Shadow Madness, a return effect allows you to permanently steal an enemy minion that would otherwise return to the opponent at the end of your turn.

Hailing from the secretive Pandaren Empire, the mighty brewmasters travel the world in search of exotic ales and the finest brewed spirits. These affable warriors rarely seek out danger or trouble, preferring instead to spend their time concocting new and tasty beverages for any brave enough to imbibe them. However, if attacked, the laughing brewmasters bring all of their pandaren agility and ferocity to bear! They even bring their beer to war! They are peerless warriors and world class drinkers all in one!

A rare few pandaren walk outside of their culture's normal ways. Brewmasters are those pandaren given to a fondness for drink. Rather than them being relegated to some outcast place in society, however, pandaren highly regard those who show such a propensity. These pandaren, like all their kind, master a craft: theirs is the creation of ales, wines and other spirits.

Yet the term "spirits" is not used facetiously among these folk, for those who would become brewmasters learn which plants, berries, and fungi harbor the most powerful spirits. They harvest these spirits and awaken them, allowing the one fortunate enough to drink one of these Master Brews to actually see and commune with the spirit.

The brewmasters learn their strange, drunken wardance from these spirits. Brewmasters are the only pandaren who are exempt from the strictures regarding the ability to create and destroy — in all things, the brewmasters are too busy listening to the spirits that swirl about within their heads to care what their peers think.

A warrior Hero, the brewmasters of Pandaria have emerged from the bamboo forests of their ancestors to bring their unique fighting style (and robust ales) to the highest bidder.