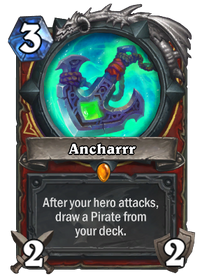 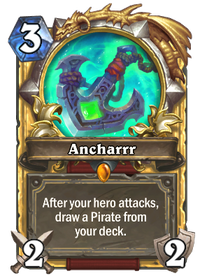 After your hero attacks, draw a Pirate from your deck.

The problem with anchors is they often end up sinking to the bottom of your deck.

Ancharrr is a legendary warrior weapon card, from the Descent of Dragons set.

Ancharrr can be obtained through Descent of Dragons card packs, or through crafting.

Ancharrr is a powerful refueling tool for Pirate Warrior, letting the player draw minions from their deck while still dealing damage to the opponent. Thanks to the strong triggered effect, Ancharrr is a great target for weapon buffs like Captain Greenskin and Upgrade!. Because of the powerful boost equipping this weapon early provides, it should be a priority card to mulligan for. Corsair Cache works very well with Ancharrr, pulling the weapon out on curve while also providing an extra swing.

Ancharrr synergizes perfectly with Hoard Pillager, which can be drawn by the weapon and can reequip it for another two Pirates.

Outside of Pirate warrior, Ancharrr can be used to fetch Risky Skipper to set up combo plays or Kobold Stickyfinger to counter an opponent's weapon.