Hearthstone Wiki
Register
Don't have an account?
Sign In
Advertisement
in: All cards, Wild format cards, Ghost art,
and 2 more

This article is using {{Card template}}.
See Help:Style guide/Card for how to edit this kind of article.
Edit this article
Ancestral Spirit
404 • CS2_038
Regular 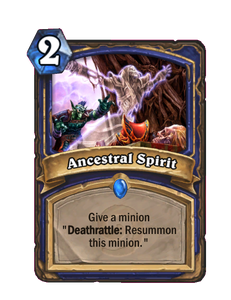 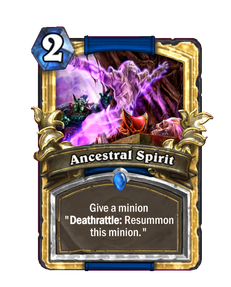 It was just a flesh wound.

Ancestral Spirit is a rare shaman spell card, inducted into the Legacy set, formerly from the Classic set. 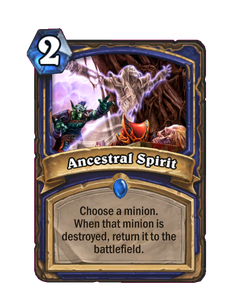 Ancestral Spirit is a very versatile shaman card. It can be used on a minion with Deathrattle, such as Cairne Bloodhoof, to both make use of the Deathrattle and bring the minion back, so that the Deathrattle might be used again. It can also be used for keeping important Taunt minions in play to keep protections up, or to keep your heavy hitters from going down too easily, such as Dust Devil.

Keep in mind that Ancestral Spirit works by granting the target a Deathrattle, so the minion you play it on is still vulnerable to Silence or transform effects. Because of this, the card is best used just before the minion dies, either through trading with the opponent's board or through combos such as Reincarnate.