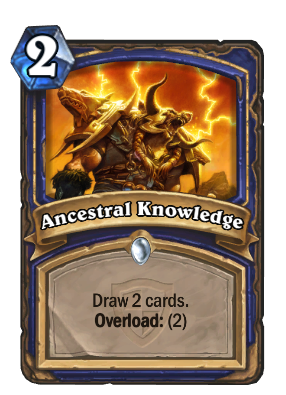 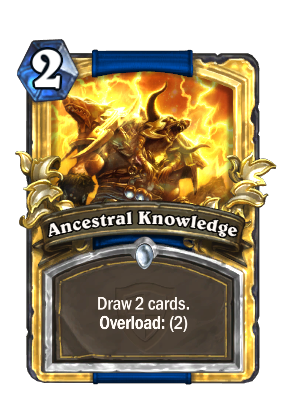 Ancestral Knowledge is a common shaman spell card, from the Grand Tournament set.

Ancestral Knowledge can be obtained through The Grand Tournament card packs, or through crafting.

Though this card is, at first, mana efficient when compared to Arcane Intellect, the Overload makes it an unsuitable card to be played in earlier stages of the game unless you are desperate for card draw. If played on turn 2, the Overload will put you at 1 mana next turn, preventing you from playing most cards. Therefore, Ancestral Knowledge is best played later in the game where Overload does not hurt your tempo as badly or when you have access to Lava Shock.

Ancestral Knowledge is potentially useful in an Ancestor's Call and Malygos shaman deck, as it provides reliable card draw, over Mana Tide Totem, to find the last combo pieces needed to kill your opponent.

In World of Warcraft, Ancestral Knowledge was a Shaman talent in the Enhancement tree. It provided a passive bonus to the shaman's total Intellect.