This article is using {{Card template}}.
See Help:Style guide/Card for how to edit this kind of article.
Edit this article
Ancestral Healing
149 • CS2_041
Regular 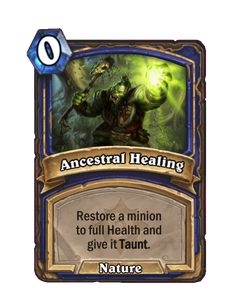 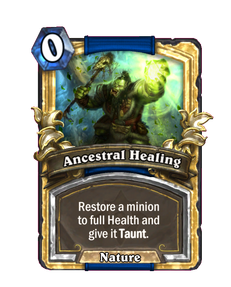 Dimensions: Full • 330 x 410px
Restore a minion to full Health and give it Taunt.
Flavor text

I personally prefer some non-ancestral right-the-heck-now healing, but maybe that is just me. 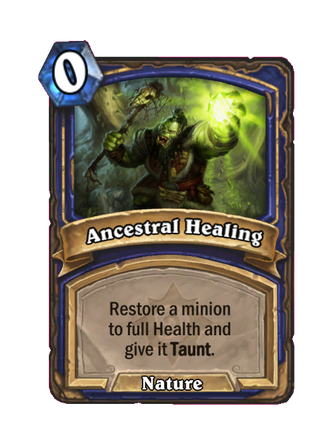 Ancestral Healing is a shaman spell card, inducted into the Legacy set, formerly from the Basic set. 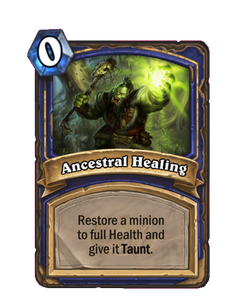 Regular and golden Ancestral Healing are uncraftable and cannot be crafted or disenchanted.

Ancestral Healing is a useful card to take advantage of early trading. Using this card on sturdier early-game minions, like

Spider Tank, after a successful trade allows them to be restored to full health and give them the powerful Taunt ability. As a bonus, since Ancestral Healing costs no mana, you can create a tempo advantage by trading early, restoring the damaged minion to full health, and then also playing another minion to keep the pressure on your opponent.

Late game minions can also take advantage of a full heal from this card. High health minions like,

Boulderfist Ogre, can take damage, be healed, and their new Taunt ability will force your opponent into using more damage or removal on a card that has already gotten value.

A rare strategy, Ancestral Healing can also be used to allow the player to attack an enemy minion that is shielded by Taunt minions. For example, if the opponent has an

Ogre Brute and a

Target Dummy, the player can use Ancestral Healing on the Ogre Brute, granting it Taunt and thus allowing the player to attack it. However, due to Ancestral Healing's healing effect, this is less desirable if the target is not already at full Health, or if the player is not able to defeat them in a single attack.

Ancestral Healing was a shaman talent in World of Warcraft that improved the shaman's healing abilities. It was removed with Mists of Pandaria. Communication with the ancestors is a central aspect of shamanism, also reflected in