This article is using {{Card template}}.
See Help:Style guide/Card for how to edit this kind of article.
Edit this article
Ancestor's Call
1998 • GVG_029
Regular 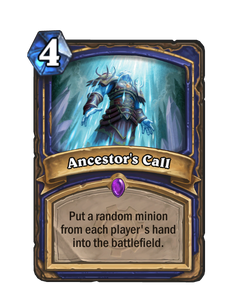 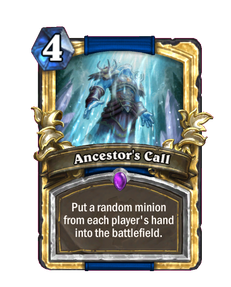 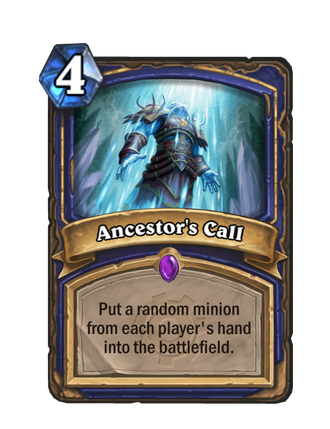 Ancestor's Call is an epic shaman spell card, from the Goblins vs Gnomes set.

This is a great card if a high cost minion can be summoned and it is likely that your opponent's summon will be weak (if playing against aggro or spell-heavy decks). Also consider playing this card when your opponent has few or no cards, as they will gain no minion. Regardless, be prepared to deal with their minion if necessary.

Hex is a great card to have as a safety against big minions.

Ancestor's Call can be used to pull out strong cards that normally have downsides, such as

Earth Elemental with overload or

Deathwing and his battlecry. Be cautious, as the same benefit can be given to your opponent, especially against warlock with Doomguards or their many giants. The flipside to this is that you and your opponent may lose out on powerful battlecries. Druids and rogues have many minions with strong play effects, so it may be stronger against them.

You have some control over which of your minions will be summoned, since you have control of your hand, while your opponent may be unable to predict and/or play around you having Ancestor's Call.

Because Ancestor's Call allows you to play high cost minions for less mana, you will have more mana available to protect your strong minion. Consider using

Loatheb, or you can make a second copy using

Faceless Manipulator. Use spells, weapons, or minions to weaken your opponent's field.

The ancestors are a core part of the shaman's path. The spirits of those gone before, the ancestors may be spoken to provide guidance, or even to grant boons such as returning allies to life. The ancestors are treated with great reverence and respect by the shamans, and are one of the main sources of their magical powers.