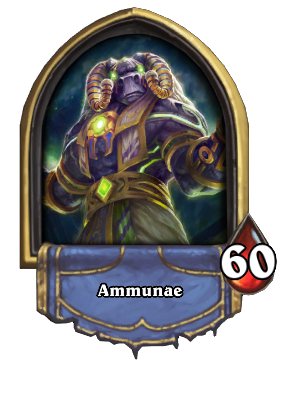 Every party needs a healer. And nobody partied like the titans.

Ammunae is a boss that can be encountered initially in Chapter 4 of Tombs of Terror. After completing Chapter 4, this boss encounter will be available in any completed chapter.

Ammunae's hero power is aimed to profitable trades, and in both modes he has big minions that can painlessly kill the player's ones and then be completely healed. So try not to leave Ammunae's minions alive, otherwise he will be able to strengthen on the table due to unkillable 7-10 minions.

In Normal mode Ammunae has quite a good start. Since there are few Rush minions in his deck, and he will play big ones when the player will already have his owns, the hero power in this encounter will not be used at all or never will give enough value. Just clear the board and cast silence or removals if they are needed.

In Heroic mode Ammunae has much more possibilities for realizing his hero power. Lucentbark and Hadronox probably will be the most unpleasant cards in this battle if the player does not have Silence, Entomb, Addarah, Band of Bees / Rocket Backpacks passives or Zephrys's Lamp / Sack of Lamps treasures. However, Lucentbark does not deal a lot of damage and Hadronox's resurrection with Witching Hour is unlikely because of four other beasts. The player can also expand the pool of Ammunae's dead beasts with Polymorph, Hex, and so on. Alternatively, the player can try to completely fill Ammunae's board with dormant Lucentbarks. For doing this kill this minion as many times as possible, then resurrect it by the enemy Hadronox. Since there is no healing in Ammunae's deck, it will be impossible to awaken Lucentbark. If the board is not completely filled with them, keep only strong minions on the board to immediately trade with boss' Amani War Bear, Charged Devilsaur and Oondasta, or take Cloak of Invisibility passive.

Ammunae
This chamber will flourish with your life energy!

You have learned to shape life, explorer.

Ammunae
A garden must be weeded. A tree, pruned.

Ammunae
Be born anew!
I shall breathe life into you.
Life, unleashed!
Life's energy is bountiful.

Ammunae
Birth. Death. Life is a cycle of destruction.
The plagues will cleanse all life. Then we will re-seed.
These Halls must be preserved.

From life, can also come destruction.

You create life as well. Curious…

You dare speak the word of death?

Life does not discriminate.

Ammunae
All must die for new life to bloom.

Ammunae - a titanic watcher - is a boss of the Halls of Origination in World of Warcraft: Cataclysm.

Ammunae is one of the guardians of the Halls of Origination. Like the other constructs within the halls, Ammunae was created to protect the powerful device capable of resetting all life on Azeroth. Each of the keepers has a sphere of influence. Isiset presides over magic; Ammunae, life; Setesh, chaos; and Rajh, the sun.
Although designed to reduce Azeroth to its base elements, the reordering system inside the Halls of Origination also creates new life. To that end, the construct Ammunae regulates the natural energies coursing through the facility to ensure that life will exist on a reforged Azeroth.