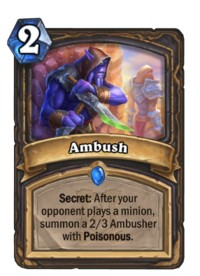 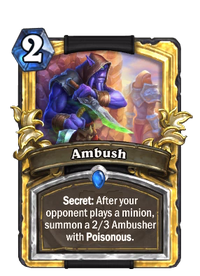 Secret: After your opponent plays a minion, summon a 2/3 Ambusher with Poisonous.
Flavor text

Ambush is a rare rogue spell card, from the Ashes of Outland set. 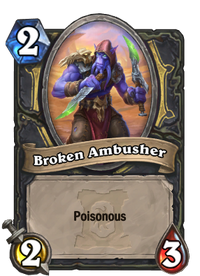 This card is nearly identical to Venomstrike Trap for Hunters, except it summon a Poisonous 2/3 minion right after the opponent plays a minion instead of when an enemy minion attacks. The two cards share many of its main advantages. On one hand, this card's minion is somewhat more vulnerable, since it appears on the board earlier. On the other hand, if the opponent isn't able to remove it immediate, it's a stronger card for tempo since it doesn't require you to have minions on board already and if the opponent plays an on-curve minion it's ready to deal with it immediately.

Ambush is an Outlaw Rogue ability that strikes a target for massive damage while in stealth.