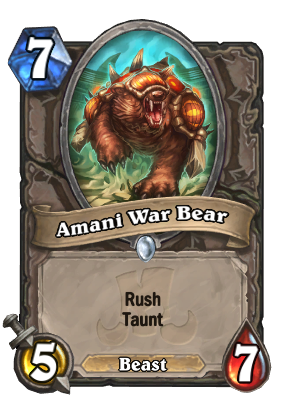 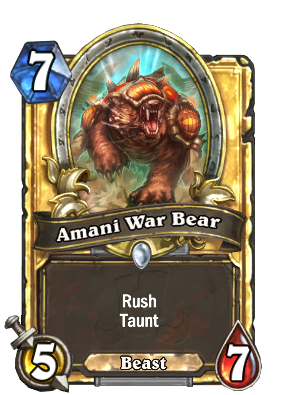 "I used to farm for hours! Now they just come in packs?"

Amani War Bear can be obtained through Rastakhan's Rumble card packs, or through crafting.

This card's key words and good stats give a great balance of defense and offense. However, it's true value is in the synergy it provides with Hunter and Warrior decks. As it is a Beast, Amani War Bear pairs well with Dire Frenzy to increase it's stats to very high levels and shuffling more into your deck. It also fits well into Rush Warrior decks, with cards like Akali, the Rhino, Woodcutter's Axe, and Rampage potentially turning it into an effective finisher. Oondasta pairs well with this card, as it is a very high-value Beast which has immediate impact on the board. Druid players can resummon this minion using Hadronox as well, giving them more initiative when Hadronox is killed.

The Amani War Bear is an unobtainable epic mount in World of Warcraft. It could only be obtained in the original version of the 10-player Zul'Aman raid instance by completing a special timed event that involved killing the first four bosses of the raid within an allotted time limit, and which would reward the Amani War Bear if done successfully. In patch 3.0.2, the War Bear was removed as a reward from the event, making it unobtainable, though the similar-looking Amani Battle Bear mount was later added as a replacement when Zul'Aman was revamped into a 5-player dungeon in patch 4.1.0.

From the World of Warcraft Mount Journal
Only the swiftest heroes venturing into the troll temple of Zul'Aman were able to subdue these rare battle mounts.