This article is using {{Card template}}.
See Help:Style guide/Card for how to edit this kind of article.
Edit this article
Amani Berserker
790 • EX1_393
Regular 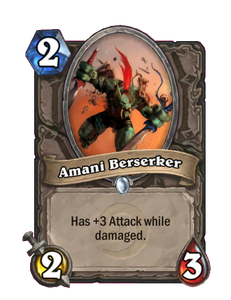 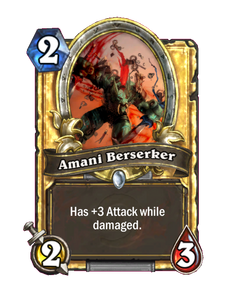 If an Amani berserker asks "Joo lookin' at me?!", the correct response is "Nah, mon". 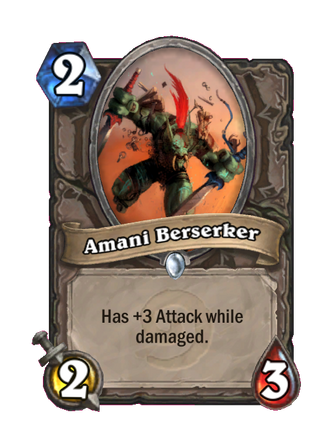 Amani Berserker is a common neutral minion card, inducted into the Legacy set, formerly from the Classic set. 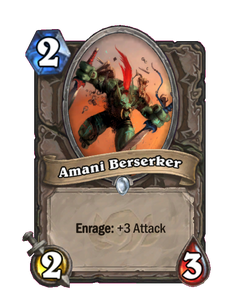 Amani Berserker is a standard 2 mana minion, with an additional enrage effect. This can easily turn the Berserker into a wrecking crew during the early game, and may make him enough of a threat to warrant hasty use of the opponent's removal.

However, to be of use a point of damage is required. If no opponent is available to injure itself upon, the Berserker remains a lacklustre 2/3. Ideally, use it to remove a 1/1 or a 1/2, before turning its enraged attentions to the enemy hero, or a more substantial minion opponent. Alternatively, the Berserker's ability can be easily triggered by a controlling mages'

Fireblast, which can be useful strategically, but this will of course weaken the Berserker.

Other typical friendly enrage triggers such as

Cruel Taskmaster's Battlecry can be used to deal 1 damage to the Amani Berserker, which will give it +2 attack as well as causing it to become Enraged for +3 attack. The Amani Berserker ends up being a 7/2 for 2 mana.

This appears to be the original, uncorrupted form of

The Amani tribe is the remnant of the once great Amani Empire. The famous Warlord

Zul'jin was the leader of the tribe for a time.