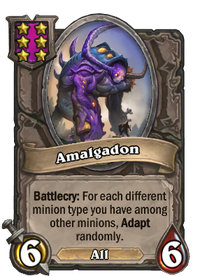 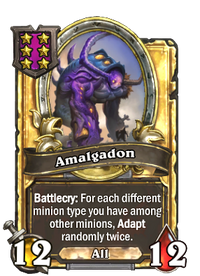 Battlecry: For each different minion type you have among other minions, Adapt randomly.

Amalgadon is a Tier 6 minion in the Battlegrounds game mode.

While Amalgadon's Battlecry is random, the Adaptations it can receive are extremely valuable, mainly Crackling Shield and Poison Spit. Even the stat-buffing Adaptations are good because it give Amalgadon good baseline stats right off the bat.

Amalgadon's true power lies in its "All" minion type, allowing it to receive an array of special buffs from any minions. It can receive Divine Shield and Taunt from Annoy-o-Module, and be given Poisonous via Toxfin, if its Battlecry didn't give it one, and it benefits from all kinds of AoE buffs like King Bagurgle, Dread Admiral Eliza, Nadina the Red, etc.

While Amalgadon favors Menagerie builds, it can still fit in any other minion tribe builds, even if less efficiently. If you have an extra minion from another tribe and have the space for it, play it before playing Amalgadon to get extra value off its Battlecry.

With a Brann Bronzebeard on your board and five different tribes on board, Amalgadon can potentially Adapt 10 or 15 times.

Amalgadon is unique to Hearthstone.