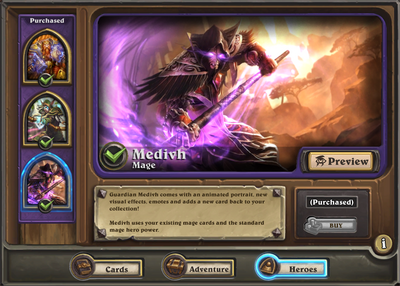 The Heroes pane in the Shop

Alternate heroes are currently available for all ten classes (with Demon Hunter — previously the last class without one — having received Aranna Starseeker as of the release of Felfire Festival bundle), with more planned for the future.[3]

Like the game's 10 original heroes, most alternate heroes are major characters from Warcraft lore (although some are original), and all come with their own portrait and emotes. In addition, alternate heroes bring special art for the 'hero tray' (the panelled area near the portrait), unique animations when using their Hero Power, and "entering the game" animations.[2]

Alternate heroes can be obtained through various means, from purchasing them with real money, to participating in special promotions. Some alternate heroes come with corresponding card backs.

Alternate hero release is often sporadic, but there are a few consistent features:

All announced and previewed alternate heroes are listed below. For a list of heroes' unique card backs, see the Card backs section.

The acquisition of some alternate heroes also grants a unique card back, usable with any deck.[22]

In June 2015 an Innkeeper's Journal blog was released apparently hinting at the introduction of a new warrior hero. An image in the blog depicted the silhouette of a figure, with the warrior class icon at the bottom, while the blog itself discussed the arrival of an "imposing, broad-shouldered figure", causing quite a stir in the tavern. A tweet from the official Hearthstone account stated "What this character lacks in height, he makes up for in ferocity! Can you guess his identity?"

Alternate heroes were officially revealed June 4, 2015, along with Magni Bronzebeard, the first alternate hero to be revealed. Alleria Windrunner and Medivh were next, teased on June 10, and revealed June 11 and 12. The feature went live with Patch 2.7.0.9166 on June 15, 2015, with Magni, Alleria and Medivh available for purchase.